Andrew Hamilton was born in Dublin in 1977. He studied in Ireland, England and the Netherlands, and his composition teachers included Kevin Volans, Anthony Gilbert and Louis Andriessen. His work has been performed internationally and at many festivals including Gaudeamus. Ultraschall Berlin, ISCM World Music Days, Dublin Fringe Theatre Festival, Sommer in Stuttgart, Huddersfield Contemporary Music Festival and the MATA Festival New York.

In 2004 he was awarded the Macaulay Fellowship by the Arts Council of Ireland and from 2005 to 2006 he was a fellow at Akademie Schloss Solitude, Stuttgart. Recently he has worked on new pieces with Juliet Fraser/Maxime Echardour, Crash Ensemble, Isabelle O'Connell, Oliver Coates, Ensemble Klang, CHROMA, the Irish Chamber Orchestra, the Ives Ensemble, Exaudi, Endymion Ensemble, TILT Brass and the RTÉ National Symphony Orchestra.

In 2012 he was an artist in residence at the Centre Culturel Irlandais, Paris and Civitella Ranieri, Umbria. Currently he is a visiting tutor in composition at the Birmingham Conservatoire. Future works are planned for a collaboration with Emma Martin Dance and Crash Ensemble for the Kilkenny Arts Festival, Exaudi and the percussionist Sam Wilson. 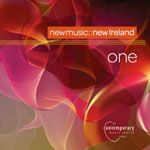 Proclamation of the Republic

Ros Tapestry Suite X: Hunt in the Forest of Ros