Musicologist Mark Fitzgerald, curator of CMC's 'Musical Tales' concert, talks about the project and the programme. The concerts take place on 26 April in the Central Library, Ilac Centre (1-2pm) and Rathmines Library (6-7pm). 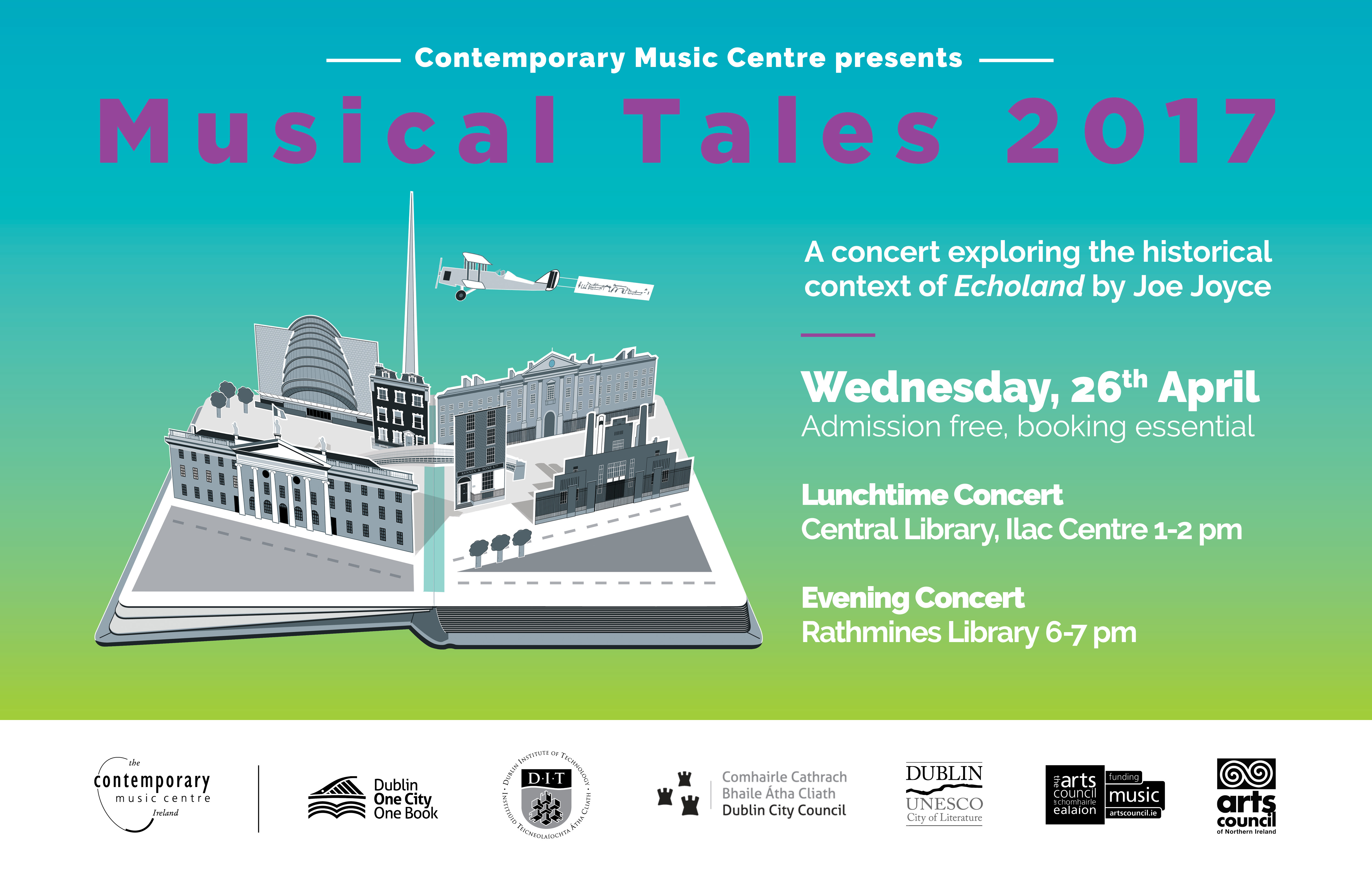 How did you go about programming the works for Musical Tales?

I began by reading the One City One Book choice for this year, Echoland by Joe Joyce, to see what ideas it might suggest. While an entire programme of music from the 1940s (when the book is set) was an option, I thought that a mix of music from the 40s and works by living composers would work better, covering as wide a range of approaches as possible. So, I spent about a week assessing potential material in the CMC library and on the websites of various composers.  The other thing I wanted to achieve was a certain variety of instrumentation within the confines of what was possible for this type of concert.

The book that serves as the starting point for the programme is Echoland by Joe Joyce. Did you have any difficulty in finding suitable works to fit with this book?

Had I been attempting to find pieces that directly illustrate the narrative in Echoland it would have been extremely difficult — as far as I can make out, no Irish composer has been inspired by either the lingerie department of Switzers or the peregrinations of Hermann Görtz to compose a short chamber work suitable for this type of concert. However, by taking a more creative approach to the brief and looking for works that might illustrate some of the ideas explored in the novel it was a lot easier to find compositions that would illuminate connections between composers and this book in an interesting programme.

One of the features of Irish composition in over the last hundred years is that there tends to be little trace of one generation of composers directly influencing a later one. This is partly due to the tendency for pieces not to receive repeat performances (particularly after the death of a composer) outside of occasional retrospectives such as Composing the Island last year.

However the piece by May has an interesting political aspect as it was written as a gesture of solidarity with the Czech people during the Nazi occupation and thus could form part of a small ‘tradition’ of works which reflect on political issues that are contemporaneous with the composer’s life such as Seoirse Bodley’s The Narrow Road to the Deep North from 1972 or Raymond Deane’s Passage Work from 2001.

The Boydell composition is a product of his involvement with the artistic circle known as the White Stag Group and that cross fertilisation between art forms can be seen in the work of many later composers. For example Rhona Clarke, one of the featured composers, has been involved in a number of collaborations in recent years with artist Marie Hanlon. Boydell started his career as a composer by hiring out a room in the Shelbourne Hotel in which he and some friends performed Boydell’s compositions. This was in direct emulation of the way in which the White Stag Group mounted their own exhibitions outside the confines of establishment venues—the first White Stag exhibition in Dublin took place in artist Basil Rakoczi’s flat in Baggot Street. This approach can be seen today in collectives such as Ergodos (there is a premiere of a piece by co-founder Garrett Sholdice in the Musical Tales concert) and Kirkos (co-director Robert Coleman is also featured in the concert).

Programmes that combine recent and older historical works by Irish composers are not all that common. How important is if for Irish music to be programmed in this way?

I like the idea of getting away from either the token contemporary composition in the midst of standard repertoire or the programme of contemporary Irish music which focuses on a single style (often by a group of linked composers) which reminds me of the description by Kevin Volans of concerts in Cologne in the 70s which consisted of ‘either all high notes or only the high notes and low notes or […] just repeat patterns in the middle.’ It is interesting for an audience to hear a range of different styles and soundworlds within the one concert demonstrating that Irish composition does not just mean one thing.