International Alliance of Women in Music Annual Concert in Dublin

The International Alliance of Women in Music’s Annual Concert takes place this year in Dublin. 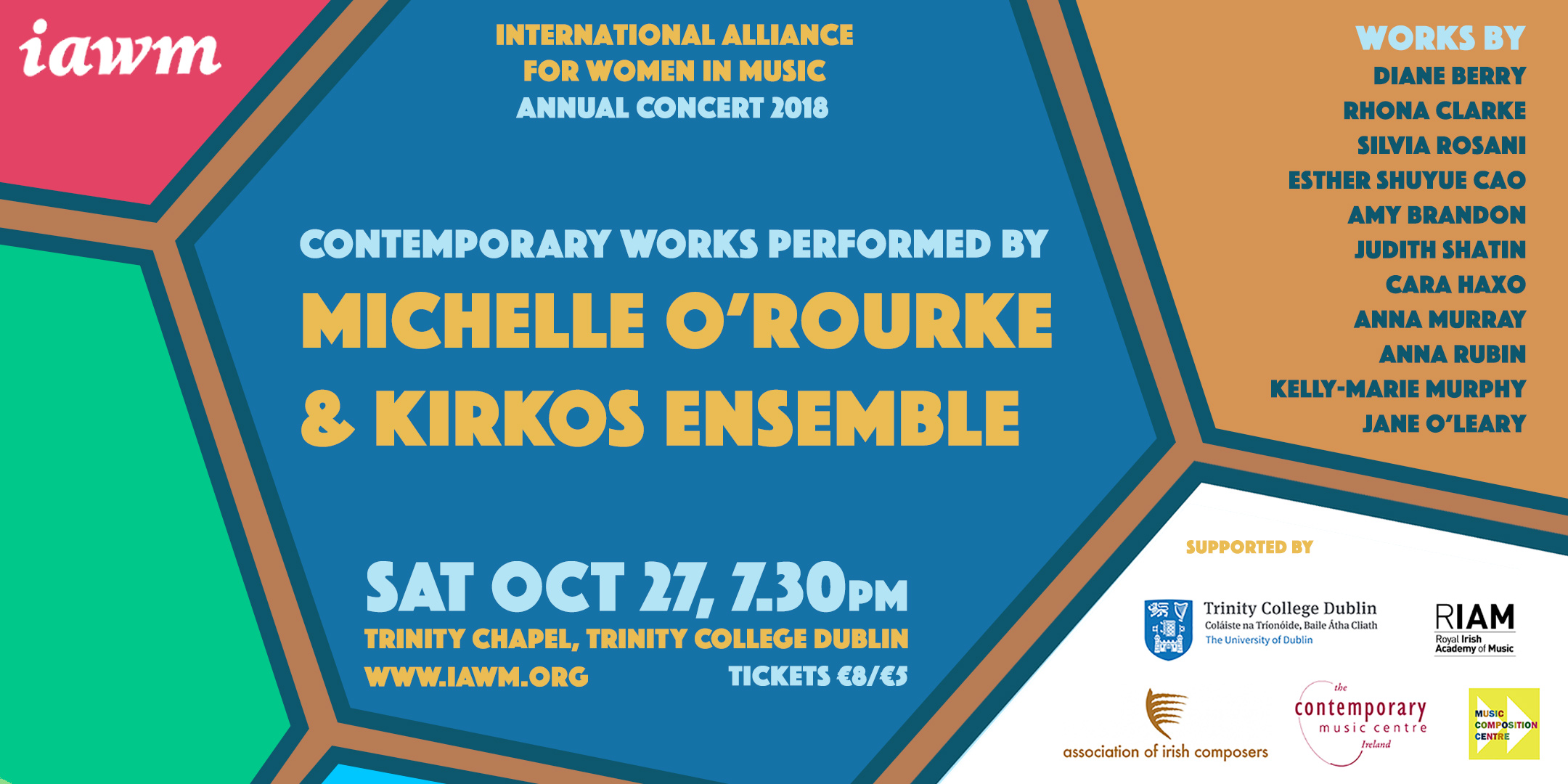 For the first time, the International Alliance of Women in Music (IAWM) holds its annual concert in Dublin. The concert takes place at Trinity Chapel, Trinity College Dublin on 27 October and features mezzo-soprano Michelle O’Rourke and contemporary music ensemble Kirkos performing a programme of works by women composers selected from a pool of entries submitted from composers around the world.

Amoung the works being performed, the programme includes pieces from Irish composers Rhona Clarke, Anna Murray and Jane O’Leary.

The IAWM is an international membership organisation dedicated to, “fostering and encouraging the activities of women in music, particularly in the areas of musical activity such as composing, performing, and research in which gender discrimination is an historic and ongoing concern.”

The concert is organised in partnership with Trinity College Dublin, the Contemporary Music Centre, the Association of Irish Composers and the Royal Irish Academy of Music, and also includes several other events leading up to the performance at 7.30pm.

CMC will welcome delegates and those involved in the concert to its centre for a coffee afternoon, before the participants move to the RIAM for a panel discussion, entitled ‘Careers in Composition’, in the Katherine Brennan Hall at 5pm chaired by CMC Director Evonne Ferguson.

Following this discussion, presentations and audio-visual showcases by Trinity College Dublin students in MPhil Music Composition and MPhil Music and Media Technology will be held in the Music Department at TCD from 6–7pm.

Speaking about the event, which is being held in Europe for the first time since 2010, IAWM Annual Concert Chair Jenn Kirby said:

I am honoured and excited to bring this prestigious international concert to Ireland. I’ve been very much inspired by recent Irish gender equality movements and ongoing rights campaigns, so when discussions began about a location for this year’s concert, I thought it was the perfect time to bring it to Dublin. I hope that hosting the IAWM Annual Concert in Ireland will not only bring recognition of the hard work being done by Irish organisations in this area, but also helps support and strengthen the movement. I am grateful for the support of TCD, RIAM, the AIC and CMC in helping me to welcome the IAWM to Ireland for the concert.

I had a personal interest in seeing the concert go to Ireland, and particularly to Trinity. In 2003, I had the great fortune to study with Dr Anne Leahy, the eminent Bach scholar from Trinity, when she was visiting the USA with the Fulbright program. I also had the pleasure of meeting Judith Ring, a Dublin native, when she presented her music with me at the IAWM concert in Lyon in 2010. Her descriptions of the Dublin music scene and the Contemporary Music Centre kept Dublin in the back of my mind. When Board member Jenn Kirby offered to coordinate this year’s concert, I was very, very pleased to see it go to Ireland, to Dublin, and to Trinity.

For booking and further information on the concert, visit the event’s Eventbrite or Facebook pages.

Anna Murray is a mixed-media composer and artist from Ireland and currently based in Tokyo.