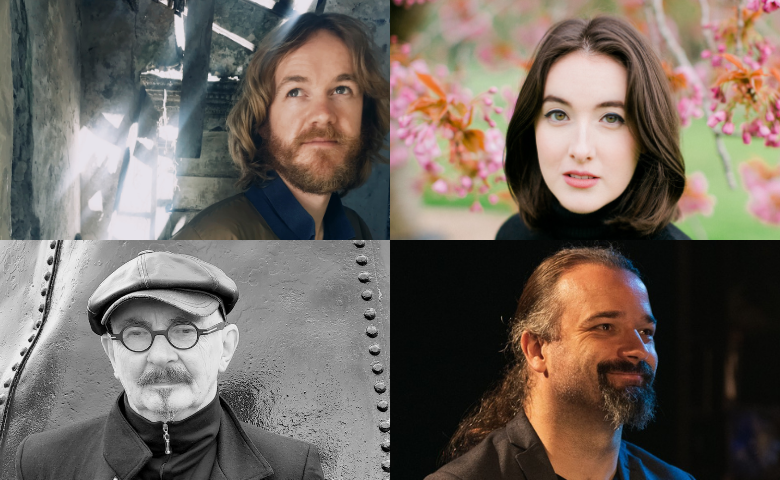 The Contemporary Music Centre is delighted to announce the Associate Representation of artists Timothy Cape, Áine Mallon, Danny McCarthy & John O'Brien. As a CMC Ireland Associate Composer/Artist, artists’ works are documented and disseminated as part of CMC’s collection. In addition, active promotional support, online promotion and access to professional development opportunities are core benefits for all represented artists/composers. Applications for Artist Representation can be made at any time, with the review and selection process taking place twice annually.

Timothy Cape is a composer from Donegal who often performs his own pieces, or works closely with musicians to find a connection between their idiosyncrasies and his, prioritising a direct communication with the audience. Exploring the psychological effects of post-fordist labour, his recent work uses performative processes to destroy ideological uses of language and rearrange them into new, mysterious languages which are then treated musically to summon ghosts of past events and invoke desired futures. Timothy was recently selected for a commission for a half-hour music theatre piece for the Venice Music Biennale, which will be performed at the festival in September 2022. He is currently working with Bastard Assignments towards a collaboration with German new music group Ensemble Garage in Cologne in August 2022.

On his conferral of CMC Artist Representation, Timothy commented;

CMC is at the heart of new music in Ireland and I'm delighted to be joining such an exciting network of composers. I'm looking forward to see what collaborations, ideas, discussions and music making are on the horizon.

Áine Mallon is an award-winning composer. Her music engages with the fundamental human experience of storytelling and has been described as “Traditional yet fresh and new” (- John Rutter CBE). She is quickly making a name for herself as a sought after composer of both Irish folk and Contemporary Classical music. Her current commissions see her working with world class ensembles and soloists such as the ORA Singers, Kirkos Ensemble, the Irish Youth Training Choir, members of the Sibiu Philharmonic, Michael McHale and Katalin Koltai. Furthermore her music has been performed in many festivals such as the Aldeburgh Festival (premiere 2022),  West Cork Chamber Music Festival, Clifden Arts Festival, Icon Arts Festival (Romania).

Áine Mallon in discussion with Director of the Contemporary Music Centre, Evonne Ferguson on the premiere of Áine's Solas Imbolc, performed by Katalin Koltai for the occasion of St Brigid's Day 2021.

Danny McCarthy is a sound artist. He studied at the National College of Art and Design. Danny currently lectures in sound art and listening as part of the MA in Experimental Sound Practice at the Music Department of Universtity College Cork and he is visiting lecturer and workshop facilitator in numerous other art institutions. Danny has pioneered both sound art and performance art in Ireland and he continues to be a leading exponent exhibiting and performing both in Ireland and abroad regularly. In 2006 he founded The Quiet Club (with Mick O'Shea), a floating membership sound (art and electronics) performance group which has presented works all over Ireland and internationally. They have a CD out on Farpoint Recordings entitled “No Meat No Bone” recorded at the Rauschenberg Foundation Capiva, Florida. Danny also has a solo CD “The Rauschenberg Scores” on the Farpoint label.

Commenting on his conferral of CMC Artist Representation, Danny said;

As a sound artist I am delighted to be represented by CMC and eagerly look forward to future developments between sound art and contemporary music.

John O'Brien is a composer, conductor and director from Cork. Compositions include: the operas Morrígan (which premieres in July 2022 at Cork Opera House), and The Nightingale and the Rose (which premiered with an Irish tour in 2018); settings of the poems Easter 1916 (premiered by Fiona Shaw and the RTÉ Concert Orchestra) and Pluto's Vision of Heaven (premiered by Cónal Creedon and the Cork Opera House Concert Orchestra) amongst others. John is currently working on a new symphony, thanks to an Arts Council music bursary, and his new string quartet Ecclesiastes will premiere at the Cork Midsummer Festival in June 2022. As a conductor and/or director, John has worked on over fifty different productions of opera and musical theatre in Ireland, UK and Canada, and has toured across Europe, Japan and China.

John O'Brien - Lullaby for the City (in a Time of Pandemic).

Timothy Cape is a composer from Donegal who often performs his own pieces, or works closely with musicians to find a connection between their idiosyncrasies and his, prioritising a direct communica

Áine Mallon (b.1994) is an award winning, Irish born composer.

Studied at the National College of Art and Design. Currently lectures in sound art and listening as part of the MA in Experimental Sound Practice Music Dept.

John O'Brien is a composer, conductor and director from Cork.