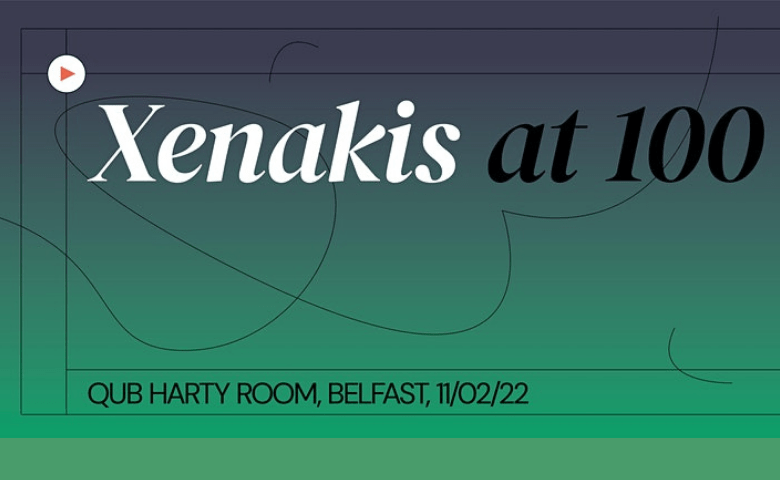 A concert celebrating the 100th anniversary of Iannis Xenakis.

In celebration of the 100th anniversary of Iannis Xenakis Hard Rain SoloistEnsemble offer audiences a concert featuring three of his works: Plektó, which uses the full HRSE forces with percussion, Rebonds, one of his iconic solo percussion works and the haunting and austere Paille in the Wind for cello and piano. Samantha McCoy’s work, shortlisted during the 5th Peter Rosser Award, offers more than a nod to French Modernism and sits comfortably in the context of this Xenakis homage. Similarly, the static yet rich harmonic textures that are revealed in Dominique Lemaitre’s work seem to resonate with all the Spectral goings-on of the final decades of 20th Century Paris. If uniqueness of timbre is an underlying theme here, Ailís Ní Ríain's piece for the unusual pairing of bass flute and bass clarinet will draw the listener in to unusual combinations of sonorities. Similarly, Raymond Deane's Seachanges has a severity and quality of timbre that is powerful and arresting.

Masks will be required in the concert hall and social distancing must be observed.

Box Office will close at 6.30 pm on Friday 11th February so please book your tickets as soon as possible.

Hard Rain SoloistEnsemble is a PRS Foundation Talent Development Partner supported by PPL. HRSE are supported by the National Lottery through the Arts Council of Northern Ireland and are Ensemble in Residence at Queen's University Belfast.

Ailís Ní Ríain is an Irish composer. Her work has been performed across Europe, Israel, Japan, Brazil and the United States alongside broadcasts on BBC and RTÉ radio and WNYC.