My work embodies contradictions that I don’t attempt to overcome: indeed, its character is probably defined by the productive friction of contradictions.

Raymond Deane was born in the west of Ireland. He moved with his family to Dublin in 1963, and gained his B.Mus degree from University College Dublin in 1974. He studied composition in Bale with Gerald Bennett (1974-75), in Cologne with Karlheinz Stockhausen (1976-77), and in West Berlin, with Isang Yun (1978-9). He taught piano and composition in Oldenburg, Germany, between 1984-86. He was elected to the Irish government-sponsored academy of artists Aosdána in 1986, returning to Ireland the following year.

He was featured composer (with G. Kurtag) at the 1991 Accents Festival in Dublin, and (with Roger Doyle) at the 1998 Sligo New Music Festival. His works have often represented Ireland at the UNESCO International Rostrum of Composers, and his large orchestral work Ripieno won a special award at the 2000 Rostrum. His works have been commissioned by, among others, RTÉ (for the National Symphony Orchestra of Ireland), the Irish Chamber Orchestra (three times), the Vanbrugh String Quartet, the Callino String Quartet, the Arditti String Quartet, the Schubert Ensemble of London, the bass-clarinettist Harry Sparnaay, the pianist Hugh Tinney (twice), the Nordlys Ensemble, etc. His chamber operas The Poet and his Double and The Wall of Cloud were commissioned by Opera Theatre Company. His full-scale opera The Alma Fetish was given its concert premiere by Wide Open Opera in Dublin's NCH in 2013.

His novel Death of a Medium was published by Odell & Adair in 1992, and his memoir In My Own Light was published by Liffey Press in 2013. He has also published many articles down the years on music and politics.

He was artistic director of the first two RTÉ Festivals of Living Music, in 2002 and 2004. In 2005 he was awarded a Doctorate in Musical Composition by the National University of Ireland, Maynooth. CDs entirely devoted to his music have appeared on the Black Box, Naxos/Marco Polo, Resonus Classics and  RTÉ labels.

Raymond Deane lives as a freelance composer in central Dublin, and spends part of the year in Fürth, Bavaria. 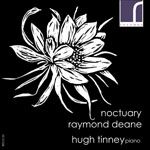 Galar an Ghrá/The Disease of Love