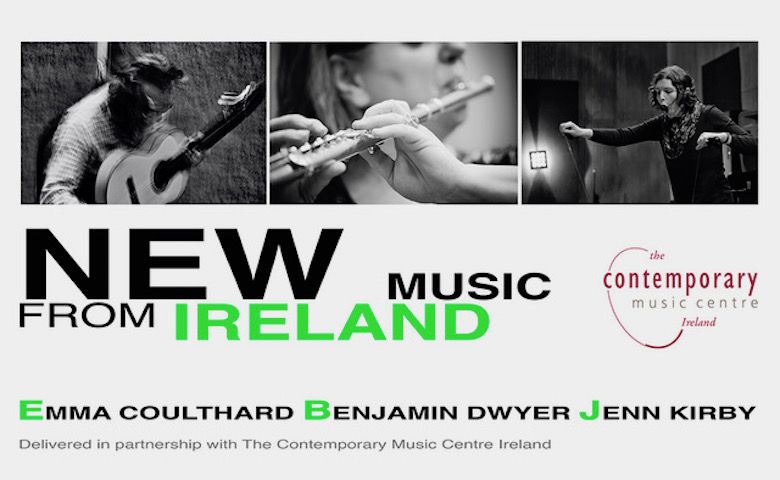 Join this trinity of Irish musicians and composers for an alternative St. Patrick’s Day celebration at Chapter Arts Centre.
This event is delivered in partnership with The Contemporary Music Centre, Ireland, and CMC’s Linda O’Shea Farren will MC the event and interview composers and performers.
Internationally esteemed composer and virtuoso guitarist Benjamin Dwyer, composer and voice & electronics artist Jenn Kirby and flautist Emma Coulthard present an exciting collection of contemporary music that reflects the extraordinary diversity and richness of output from the island of Ireland.  Ranging from a new incantation for St. Patrick to the witnessing of the ancient Sheela-na-gig, this music will challenge definitions and present a fresh perspective of contemporary music from Ireland.
£10 (£7 conc) to include post-concert wine reception hosted by CMC Ireland
Age 14+

SacrumProfanum is work-in-progress that explores the enigmatic stone carvings found all over Ireland (and in parts of Britain) known as Sheela-na-gigs.  I have spent the last ten years travelling across these lands studying, photographing and sketching these mysterious figures. It is clear to me that this abject though mysterious figure, because of her very complexity, has an extraordinary associative power. What could she represent as witness to Ireland’s unfolding political, religious and social histories?

I have thus tried to create music exploring themes such as feminism, colonialism, identity, religion, symbol, rite, sexuality and the disintegration of Gaelic culture.  In a score that combines contemporary music interfacing with traditional Irish forms, instruments and sean-nós singing, SacrumProfanum explores these themes through raw, visceral, often abject music.

HAG is perhaps the most abject of all the works in SacrumProfanum.  Composed for amplified flute and bowed guitar, it takes on the role of the Sheela-na-gig, or the HAG, as she has often been called.  She’s an underdog to fight for; she’s a defiant hag that rejects colonial narratives; while she’s a witness that shows her scars of damage, she also rebelliously spits back in the faces of her oppressors; disrupting dominant notions of beauty and feminine grace, she is an ‘ugly’ feminist that asserts her sexual agency and defiantly returns the gaze of the male uncomfortably back at him.

Jenn Kirby is a composer, based in Dublin. She composes both acoustic and electronic contemporary works.