Through the Digital Door: Cello works in CMC's Library 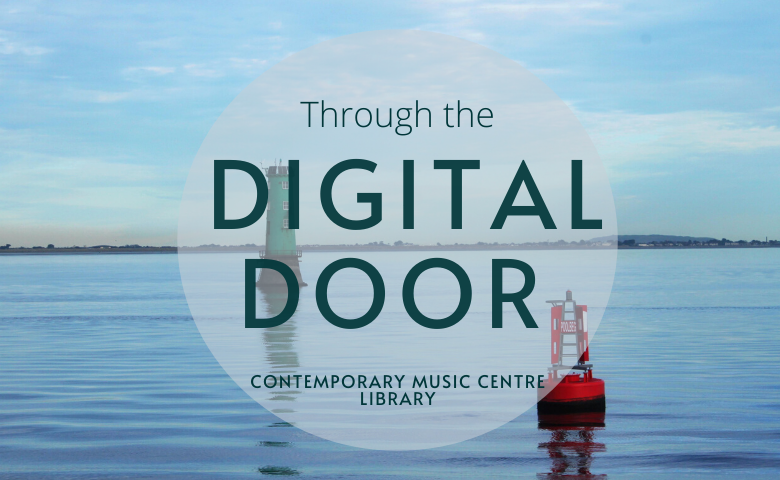 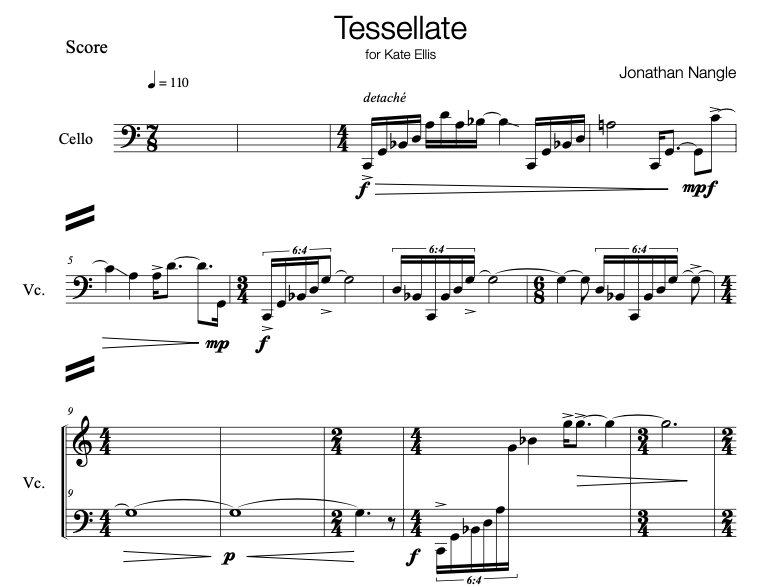 This work, performed by cellist Kate Ellis, is included on an album of Jonathan Nangle's music Pause, released on the Ergodos label in 2017.

A tessellation is created when a shape (triangles, squares, hexagons) is repeated over and over again covering a plane without any gaps. Tessellations surround us, from elaborate tile mosaics adorning buildings, the honeycomb structure of a beehive, to the pattern on the sole of your shoes.
The electronics in this piece take this idea of a repeating pattern to build a bigger picture. Very small snippets of sound are sequenced through grid-like patterns, however, the grid is in constant flux, so although there is a sense of repetition it is stretched and compressed, reordered and renewed, with variations in the sonic palette and irregular rhythmic shifts. 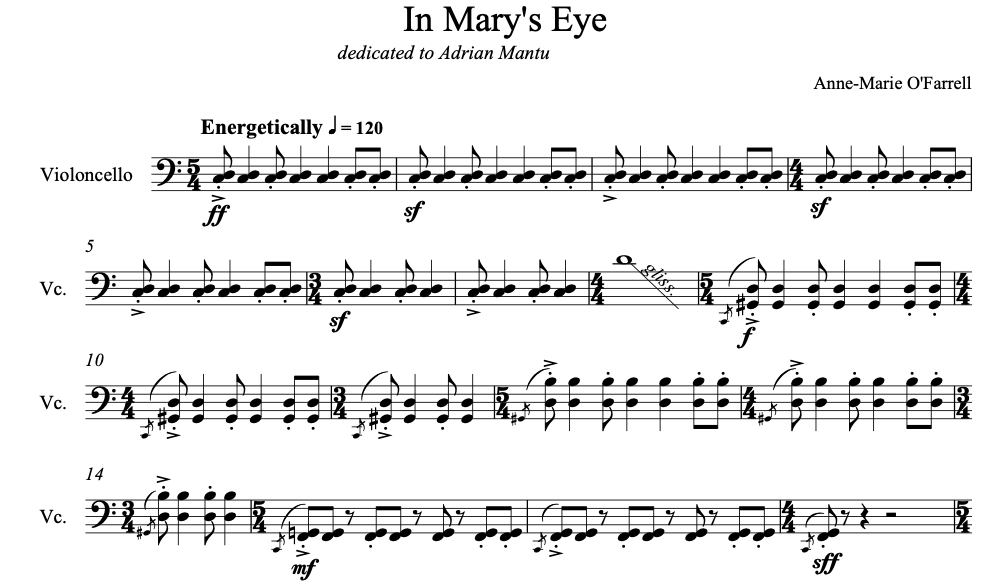 This work was composed as part of an AEPE residency in Mary Immaculate College, in association with the Lime Tree Theatre and funded by the Arts Council.

This piece was inspired by the name of Mary Immaculate College, and an exploration of the meaning of that name. In Marian icons, the gaze of Mary is of paramount importance, sometimes drawing the viewer in, and sometimes focusing on the Christ-child. Another point of ignition for this piece was the mural by artist Joe Caslin on Limerick’s Dock Road, which from a distance resembles a more traditional image of Mary, veiled in white. At closer range, the image of a teenage boy becomes clear, as he gazes intently, perhaps expressing a sense of being disenfranchised. These two figures, Mary and the teenage boy, are expressed in the voice of the cello, Mary in the high, song-like passages, while the boy is expressed in the lower register of the instrument through energetic rhythmic patterns which never quite settle—until the close of the piece, that is, when the two voices meet, across both registers and come to rest.

This work was performed by cellist Adrian Mantu as part of CMC's OurTunes celebration in 2015, a festival for children aged 5-10. 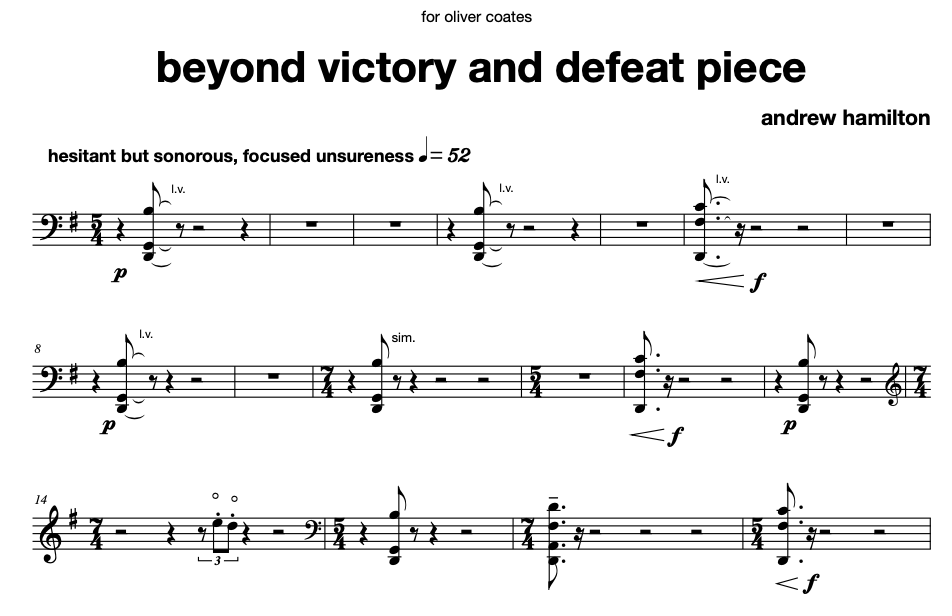 This work was commissioned by cellist Oliver Coates and Harmonic Series. The cellist uses two bows to play the chords in this work. The quote below is included on the front page of the score:

"Victory leads to hatred
for the defeated suffer.
The peaceful live happily
Beyond victory and defeat." (Dhammapada, verse 201) 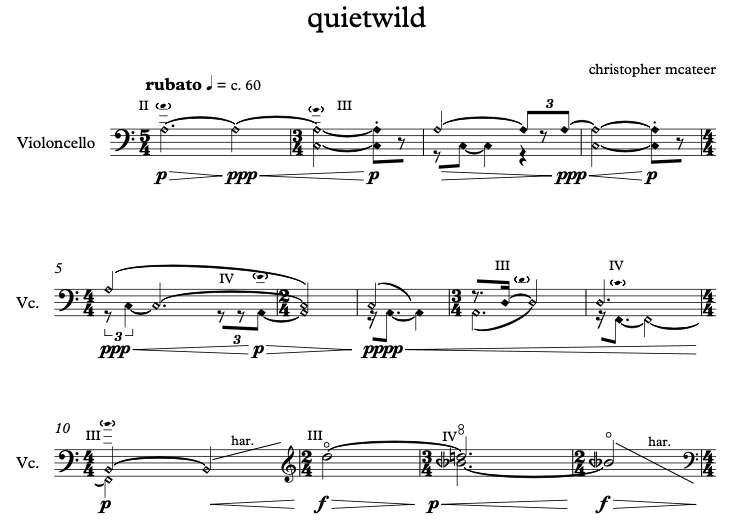 quietwild is a piece about the wildness within quiet, contained music, and how this can erupt and express itself. Written for solo cello, it pushes the boundaries of natural harmonics, creating complex arpeggiated chords of harmonics that shift and evolve. This is later interrupted and then usurped by loud, expressive music that creates wilder melodies. This work was premiered by cellist David McCann at the Crescent Arts Centre in Belfast in 2018.
The composer writes about the inspiration for this work:

It was late in October of the previous year when I pulled into the carpark of the forest, a couple of miles past the last village, opposite the abandoned farmhouse. The ruins of the old manor were clawing over the hill and I could hear the low, sloshing wash of the sea as I stepped out of the car. It was only a short walk to the winding path that crept down into the forest, disappearing into a shadow of bristly pine and half-naked oak. There, on the fringes of the wild forest, there was a tension in the landscape that unsettled something nameless within me. I looked one way and saw the vast, sombre wilderness, silent and looming, where my most ancient ancestors had perhaps once dwelt. I looked the other way and saw the rigid farmhouse and grid of fields where more recent ancestors settled and cultivated the land. I squeezed past the barrier and descended the trail, slipping down into the quiet wild, drawn by a shadowtongue voice that told me go. 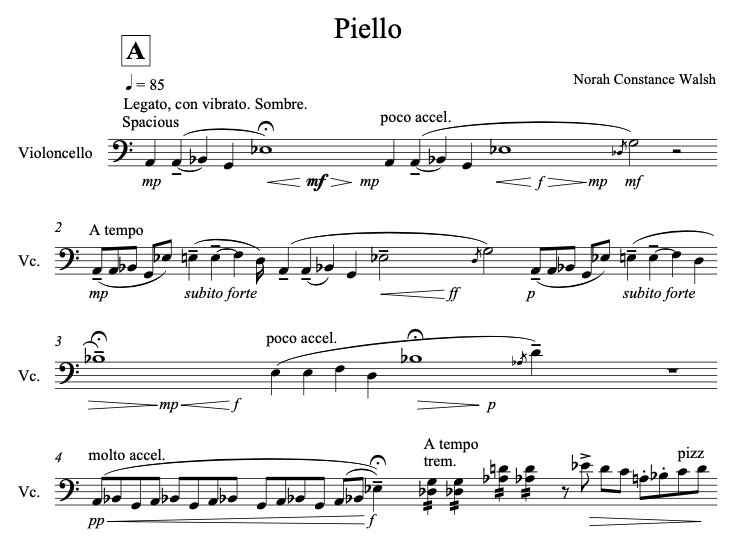 This work was premiered by cellist Polly Ballard in 2011 in the Pepper Canister Church in Dublin.

Piello is a short piece for solo cello written at the end of 2010. The mood is both sombre and serene, drawing from the sometimes grave and sometimes mellow tones of the cello. The opening 7-note motif is the subject of a musical argument between two sets of pitches: one begins it and the other eventually wins it. There is an evolution of this core material as fragments of this motif appear and develop throughout the piece, worked into new themes and expressed through a variety of techniques and articulations. There is no extra-musical representation in this work, it explores thematic expression, truncation and resolution.

Consisting of five short movements, this work was commissioned by Concorde Ensemble and premiered by cellist Martin Johnson at Concorde: Up Close with Music in the Gallery of Photography in Dublin in 2012. This work is published by Universal Edition and is dedicated to Jane O'Leary.

The German-American photographer Evelyn Hofer lived in Dublin from 1965 to 1966 and produced the book Dublin: A Portrait in 1965. Five photographs from that collection provided the starting point for these five little pieces for solo cello. They are outlined by the composer below:

1. Girl with bicycle - a young girl looks wistfully over her shoulder. The bicycle is clearly much too big for her.
2. Anna and Emma - A black and white photo of two chambermaids; one youthful, the other much older with a sever yet stoic look in her eye. It occurred to me they might be related or even the same person at different stages of their life.
3. Gravediggers - Another black and white portrait, this time of three gentlemen with huge shovels dressed in heavy overcoats and sporting Panama hats. They might have stepped out of a Raymond Chandler novel.
4. Phoenix Park on a Sunday - Four knobbly kneed men dressed in garish pink, red and black football kit stand in a line with their arms folded. I imagined what the ensuing match might have been like.
5. Mountjoy Square - Covered in a thin blanket of snow, this scene is devoid of people. An empty park bench in the foreground suggests a ghostly absence.

This work was written for cellist Laura Moody and is included on the composer's album What was released on the Ergodos label in 2014.

Recordings were made of the musician exploring her instrument in imaginative ways. The resulting sounds were composed into a tape part that provides an exciting accompaniment to the energetic live part. The performer is free to interpret the score in an individual manner by embellishing the timbre to blend and/or contrast with the tape part. 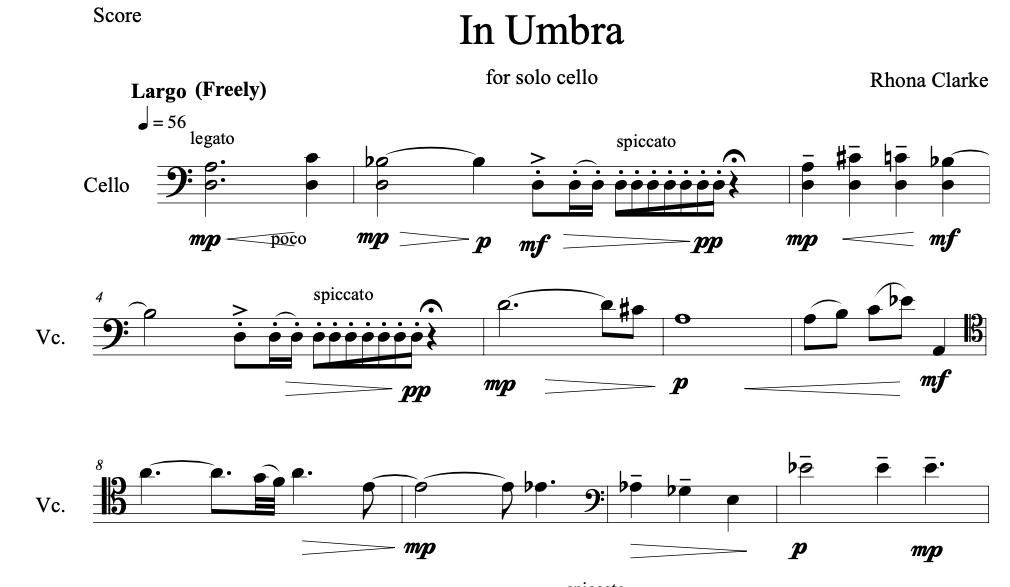 This is a short work that explores the lyrical and darker tone quality of the cello. It was premiered by Arun Rao at the Hugh Lane Gallery. 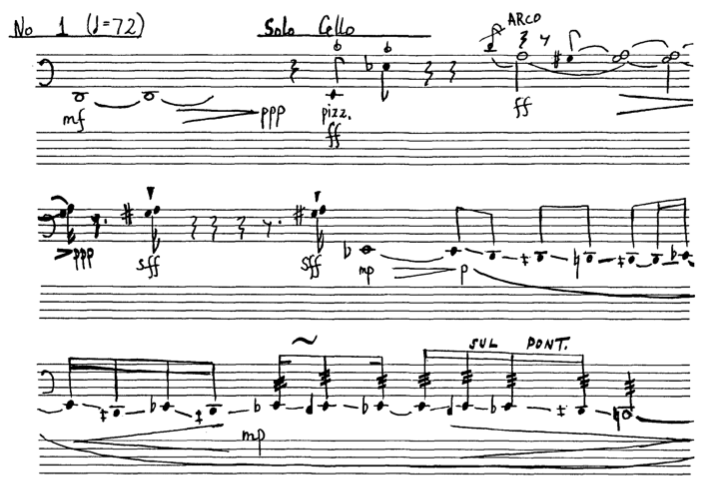 Small melodic and rhythmic motifs are varied, developed and expanded by a variety of means to form the structure of the piece. Some of these fragmentary ideas, first announced in the opening piece, are subsequently developed in the other two.

This work was premiered by cellist Martin Johnson on 26 November 2015 at Frank Corcoran, James Joyce, and the Poetics of Myth: A Celebration of Frank Corcoran at 70 at the James Joyce Centre, Dublin. This work was included on the album Rhapsodic Celli: The Music of Frank Corcoran released on the RTÉ lyric fm label in 2017. This album sees soloist Martin Johnson exploring Frank Corcoran’s writing for cello in all its nuances, from the swagger of a concerto and the rhapsodic polyphony of his work for eight cellos through to composer’s arrangements of folk tunes for cello and piano informed by the rhythmic patois of the Irish language.

Premiered by Kate Ellis in 2007 in the National Concert Hall, Ireland, this work was also performed at CMC's Salon in September 2007. The tape part contains an interpretation of A Song for Old Lovers by Jacques Brel alongside Nightflying Me Back To...', a poem by Ailís Ní Riaín.