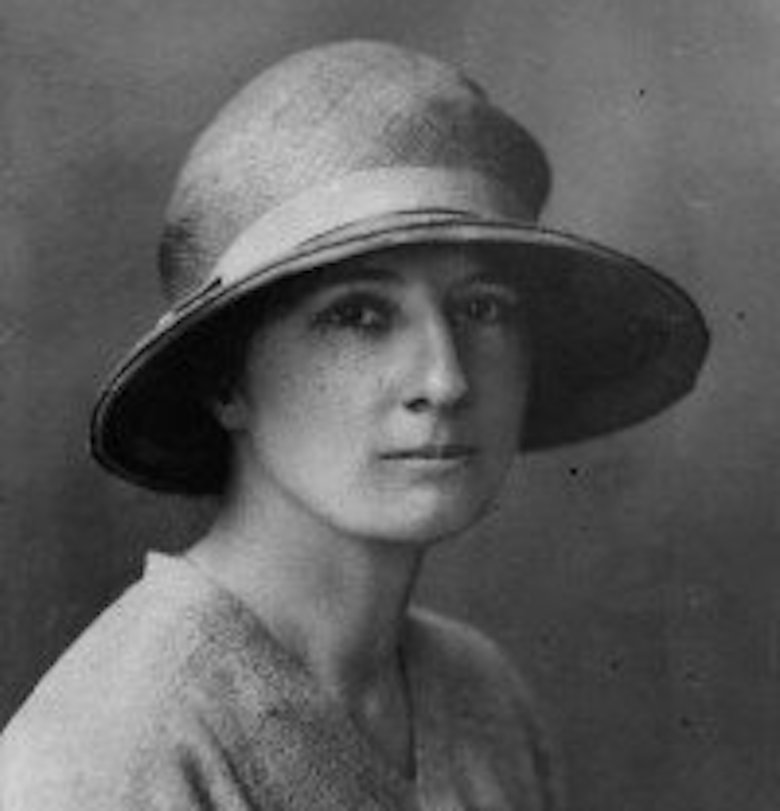 Sophie O’Carroll is a classical soprano, music teacher and writer studying for a Masters in Performance and Musicology at Maynooth University. She has undertaken a 4-week work placement with the Contemporary Music Centre as part of her studies. Here she has been researching Ina Boyle’s Three Songs of Walter De La Mare.

Ina Boyle (1889-1967) was one of Ireland’s most prolific composers of the early 20th century. She grew up in Bushy Park, Enniskerry, where she remained for her entire life. She was privately schooled from home and began learning the violin and cello at an early age. She subsequently studied theory and composition with several well-known teachers of the day, including Charles Wood and Percy Buck. Her talent was later fostered by prolific composer Ralph Vaughan Williams, with Boyle travelling to and from London to study under his expert guidance. She received much early critical and public acclaim, winning several prestigious competitions and having her works performed by major orchestras including the London Symphony Orchestra. However, the arrival of World War Two prevented Boyle from travelling for her studies and much of her work was not published. The style of her compositions was often considered old-fashioned at a time when serialism and atonality were gaining popularity. Boyle led a secluded life that didn’t lend itself to aiding her career. A huge proportion of her works have never been performed1.

There has been a great revival of interest in the works of Ina Boyle in recent years. The Ina Boyle Society has been involved in projects to help gain recognition for her works. CMC 2019-2020 Scholar in Residence and DCU PhD scholar funded by the Irish Research Council Orla Shannon has undertaken major research on Ina Boyle2 and many of her compositions have now been typeset from the original manuscripts housed in Trinity College Dublin.

For my research project, I have focused on Boyle’s song cycle Three Songs of Walter de la Mare. The Contemporary Music Centre has a typeset score of this work, which has been central to my analysis. This was typeset from the original score in Trinity College Dublin, which I was able to access through their Digital Collection. The CMC also have the 2015 commercial recording of this work from the album I am Wind on Sea, which proved invaluable to my research. The staff of the CMC were able to arrange for me to interview Orla Shannon, who has completed major research on Boyle. Ita Beausang and Seamas de Barra’s recent publication Ina Boyle (1889-1967): a Composer’s life was central to providing biographical and historical information on Boyle. The resources and guidance provided by the CMC has formed the basis of this research project.

Ina Boyle was a prolific composer of vocal works and was inspired by literature and poetry. Walter de la Mare was one of her favourite poets. The first two poems that were chosen for this song cycle, The Song of the Mad Prince, and The Pigs and the Charcoal Burner, are from de la Mare’s anthology for children Peacock Pie3, published in 1913. The final poem, Why, which Boyle renamed Moon, Reeds, Rushes, is from Bells and Grass4, published in 1941.

This song cycle is written for medium voice and piano and was composed in 1956, in the latter part of Boyle’s career. The cycle was dedicated to her cousin, Ina Jephson. All three songs are modal in tonality, as are much of Boyle’s works. There are several compositional devices used throughout this song cycle that are signature features of Boyle’s style.

The Song of the Mad Prince, details a prince engaged in a non-sensical monologue, reminiscent of Hamlet. It is composed very sympathetically for the voice, with a relatively narrow range of just over an octave. Boyle mirrors the repetition of ‘Who said...’, in the text with a falling 3rd motif. The piano accompaniment also features a recurring motif, which lends itself to the comedic nature of the song. Chromaticism features throughout, aiding the ambiguous tonality and the sense of ‘madness.’ This instability of the prince is also mirrored in the rhythmic aspect of the music, with triplets, ties and rests found throughout, along with changing time signatures. This element of music mirroring text is completely emblematic of programme music, whereby the music is telling a story and setting the scene. At a period of vast change in the musical landscape marked by Modernism and the Second Viennese School, Boyle’s style could be considered more Romantic and 19th century in nature. Much like her mentor Vaughan Williams, Boyle didn’t follow the musical trends of the day. 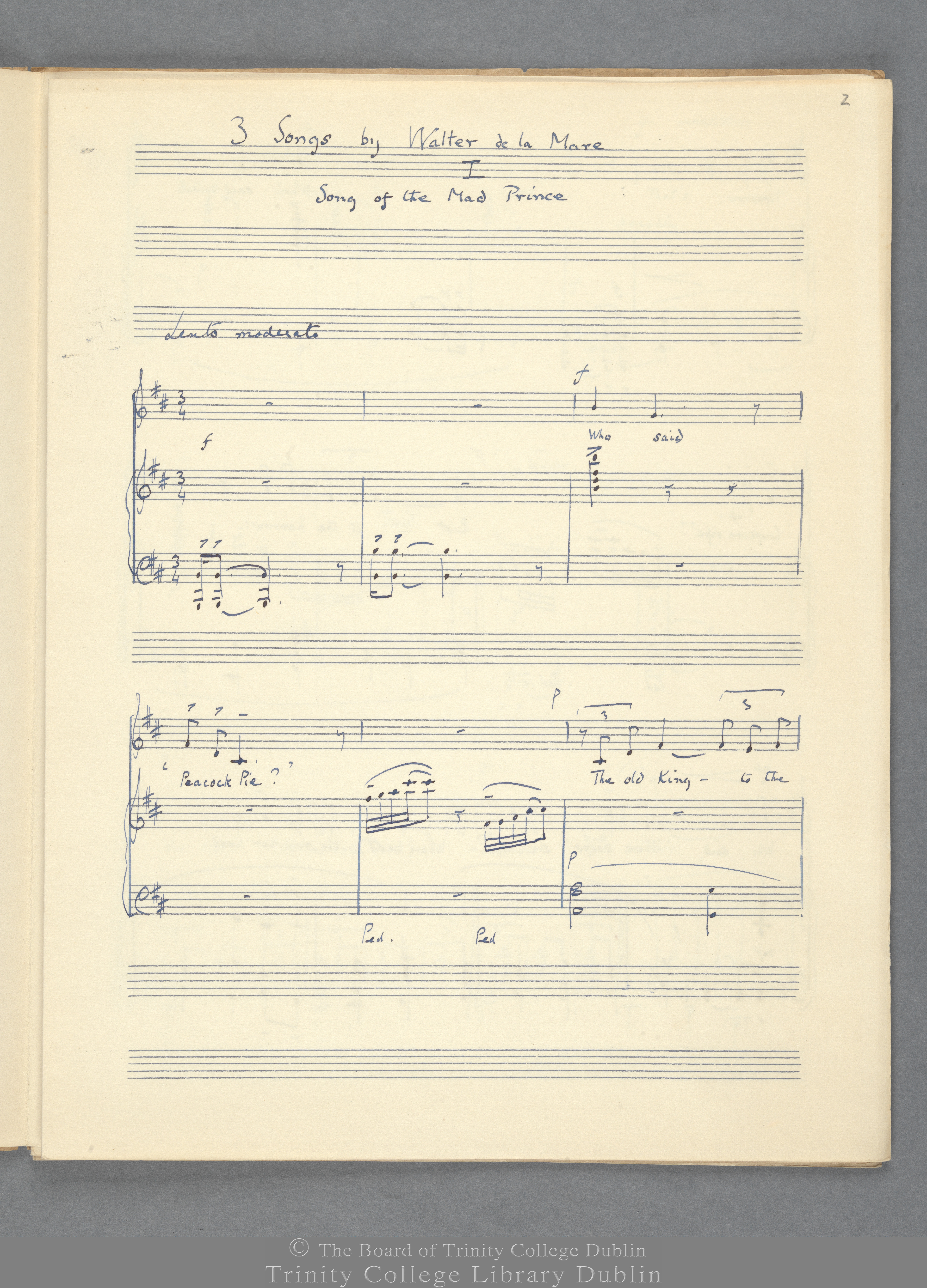 The Song of the Mad Prince – Estate of Ina Boyle and the Board of Trinity College, the University of Dublin

There are two different versions of The Pigs and the Charcoal-burner, written by Boyle. According to Boyle scholar Orla Shannon, the composer gave no written indication as to which version is the definitive one. The CMC typeset score of the song-cycle contains both versions, so it is up to the individual performer to decide which to use. There are only minor differences between them.

The Pigs and the Charcoal-burner - Versions 1 and 2

This song describes comedically the adventures of a group of pigs in the forest and compares their jolliness to the despairing charcoal burner. Again Boyle utilises motifs in the accompaniment, which conjure up images of the pigs scuttling around. Octave leaps are found in the vocal line, with a range of only ten notes. Chromaticism features throughout, along with triplets, ties and changing time signatures.

Moon, Reeds, Rushes is an altogether stiller and more tranquil piece, depicting longing for lost love. Modal in nature, octave leaps and chromaticism feature throughout the vocal line. These help to create a dream-like atmosphere. The vocal range is very narrow, just nine notes. A falling second motif on ‘ever’, reoccurs in the first half of the song. Long sustained notes over a busier accompaniment line again aid the tranquillity and dreaminess of the piece. 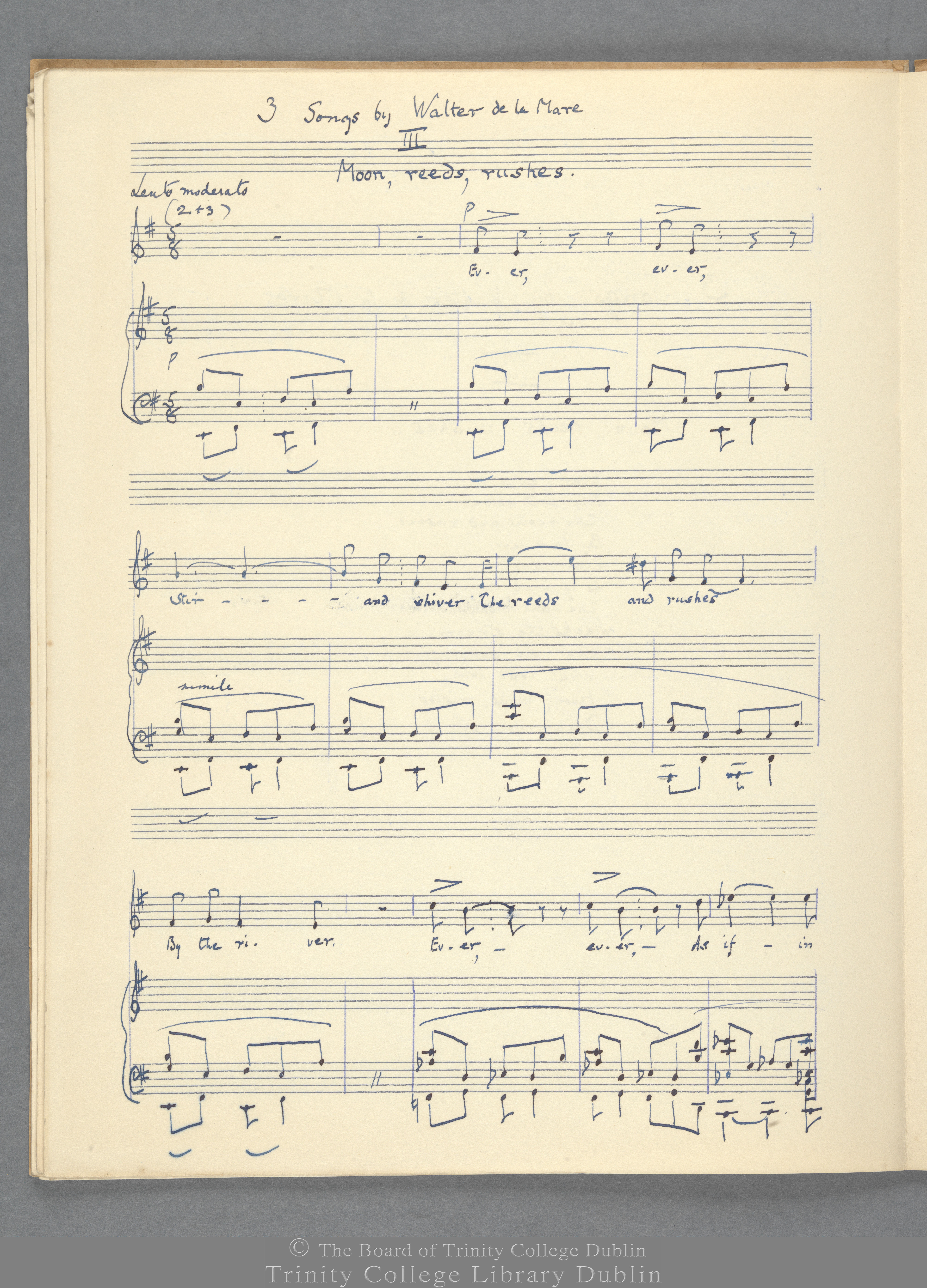 Moon, Reeds, Rushes -Estate of Ina Boyle and the Board of Trinity College, the University of Dublin

Boyle annotates her scores with very frequent dynamic markings and articulation, giving the performer precise instructions on how to perform these songs. In The Song of the Mad Prince, she indicates to the singer to vocalise ‘harshly,’ on two occasions. 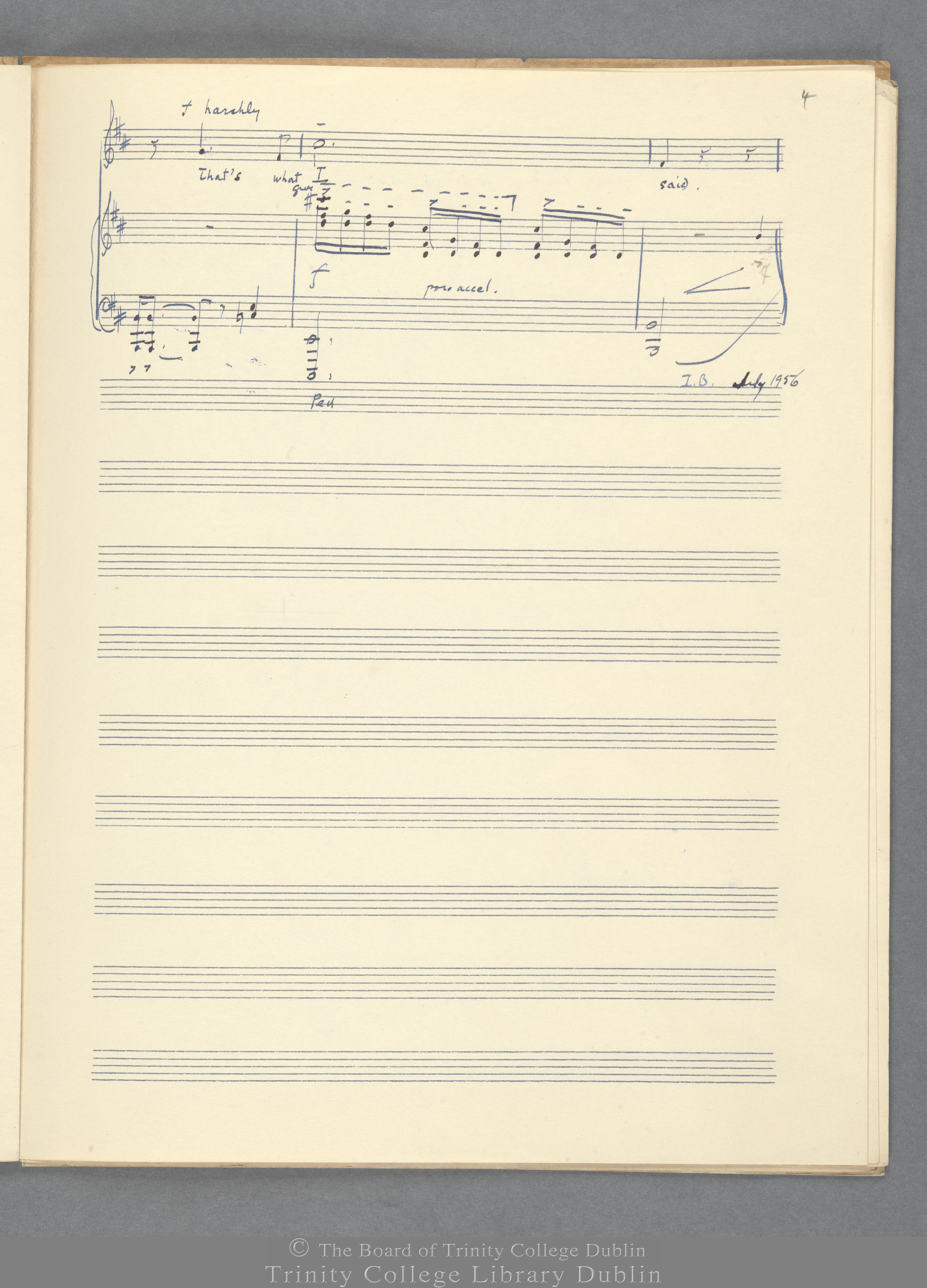 The Song of the Mad Prince - Estate of Ina Boyle and the Board of Trinity College, the University of Dublin

Thus throughout this song cycle, ambiguous tonality, narrow vocal range, octave leaps and motifs are common to all three songs. This composition most definitely reflects the poetry and portray Boyle as a very adept composer of art song.

To me, the influence of Impressionism is evident in this work. Boyle uses motifs and ambiguous tonality to create the scenes and atmospheres of the songs. The rhythmic instability used throughout is also a feature of Impressionist music. The influence of her mentor Vaughan Williams is evident. The music of Debussy was one of his major inspirations.

Much of Ina Boyle’s music remains unperformed. Only two recordings of Three Songs of Walter de la Mare, exist in the CMC’s Sound Archive. The first is an archival recording from RTE made in the 1960s. The second recording comes from the CD, I am Wind on Sea, featuring mezzo-soprano Aylish Kerrigan and pianist Dearbhla Collins. It was released in 2016 by Metier and also features Boyle’s Sleep Song. A forthcoming Ina Boyle album from the Wigmore Hall will be released later this year through Delphian Records. This recording will feature Three Songs of Walter de la Mare performed by Paula Murrihy and pianist Iain Burnside. An Ina Boyle songbook will also be released to correspond with the album launch. This will be a crucial development for helping Boyle’s works to become more accessible to performers.

Three Songs of Walter de la Mare is a song cycle that reflects the style and strengths of Boyle as a song composer. Through the renewed interests in her life and works and the mammoth work undertaken by various organisations and individuals to publicise Boyle’s legacy, one can look forward to Ina Boyle finally gaining the recognition she deserves.