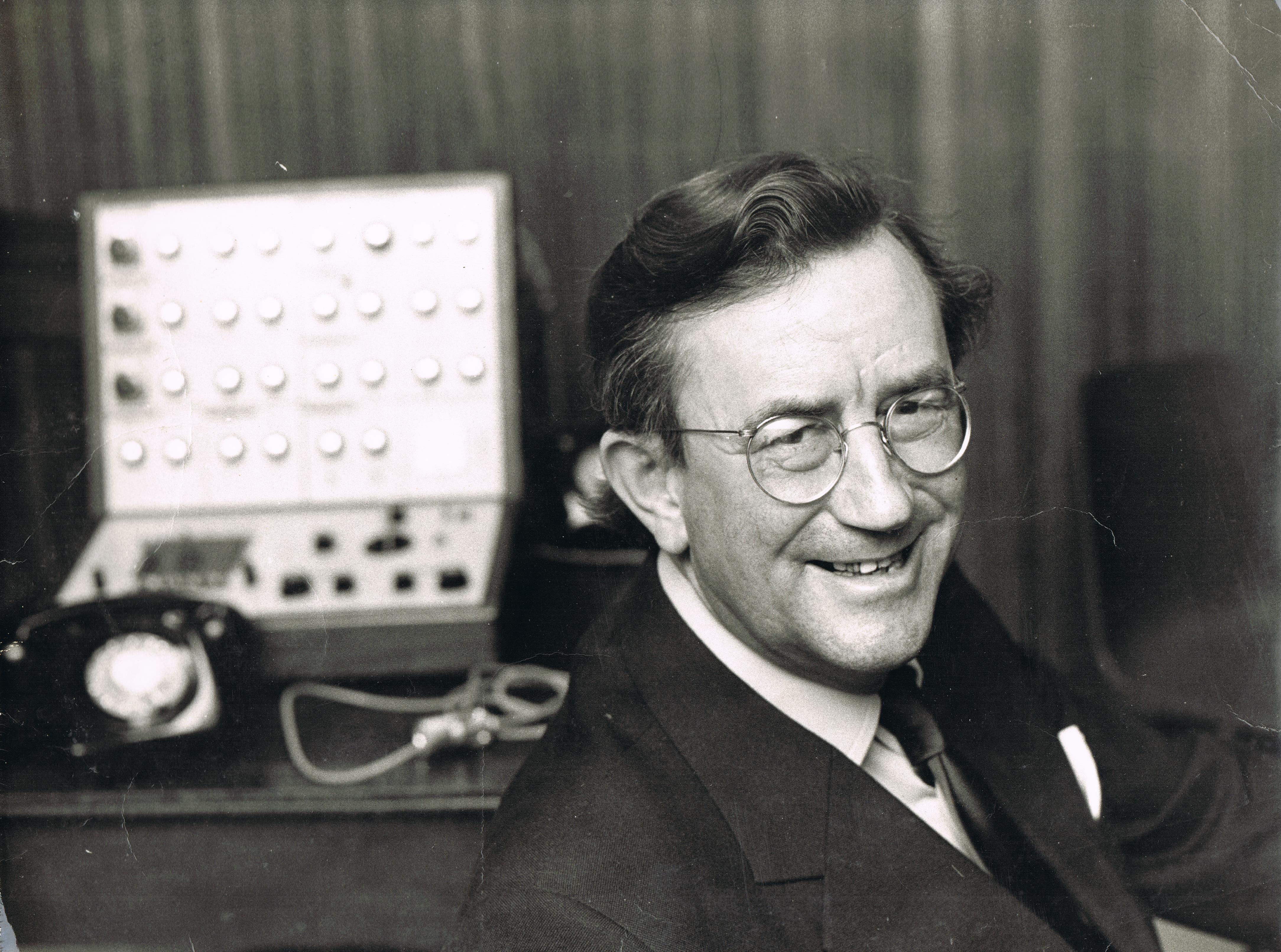 To mark the centenary of Irish composer A.J. Potter’s birth, musicologist and music editor Sarah Burn, whose recent PhD was on the subject of Potter's Sinfonia “de Profundis”, writes about his life and music.

He has a marked talent for the incisive damning phrase, yet basically he has the same angry compassion that has distinguished Irishmen like Swift and Beckett. With his almost formidable gusto goes a quiet, immediate sensitivity; under it all is a mixture of humility, the capacity for surprise, and a high seriousness that is often found in the very greatest artists.

So wrote ‘Michael George’ (the pseudonym of Alec Reid) in The Irish Tatler & Sketch in May 1964 in his profile of the composer Archibald James Potter (Archie), the centenary of whose birth occurred on 22 September 2018. Reid’s insightful assessment shows a rare understanding of Potter’s many-faceted life, personality and music. Archie Potter was one of the best-known of Irish composers, from the beginnings of his career as an adult composer in Dublin from c. 1951, through the 1950s, 1960s and 1970s, until his death on 5 July 1980. He achieved public recognition of his own music, of the composer’s craft, of the financial value of music and of the economic rights of composers. As an educator on all these matters he was well known through his writings, broadcasts and work on committees. He became particularly well known through two RTÉ radio series, Listening to Music and The Young Student’s Guide to Music, produced by Jane Carty. He said that he did not write music in an ivory tower, for him music was a means of communication. In response to a question from the music critic Charles Acton, Potter said that he wanted the audience to listen. ‘If I were painting pictures I would paint pictures because I wanted to show people what my idea of such and such a thing is. I write music for the same reason.’

He was born in Belfast, the youngest child of a blind piano tuner. The family’s circumstances descended inexorably and when he was ten he went to live with an aunt and uncle in Kent. His aunt’s voice-training lessons enabled him to win a scholarship to one of the finest choir schools, the 'high Anglican' All Saints’ Church in Margaret Street, Westminster in London. As well as receiving a superb musical education he began his career as a composer. From All Saints he won an organ scholarship to public school, Clifton College near Bristol, and from there he won a scholarship to the Royal College of Music where he was a composition student of Vaughan Williams. War service followed, including some years as a Captain in the Indian Army in Burma, and from 1946 he worked for the United Africa Company (later, Unilever) in Port Harcourt, Nigeria. He returned home in 1949, resumed composition and re-worked a Missa Brevis he had begun as a student. It won a Festival of Britain prize in 1951 and was eventually performed in Dublin by the Radio Éireann Singers under Hans Waldemar Rosen

Potter joined the Choir of St Patrick’s Cathedral in Dublin in 1951 as a bass Vicar Choral and began to make his mark on Dublin’s musical scene as a singer, a singing teacher (at the Royal Irish Academy of Music) and as a composer and arranger, later becoming Professor of Composition at the RIAM.

He won the Radio Éireann Carolan Prize for Composition in 1952 with Two Pieces for Orchestra, a diptych consisting of *Overture to a Kitchen Comedy* and Rhapsody under a High Sky. A ‘kitchen comedy’ was a popular farcical type of drama, rather lower down the social scale than a ‘drawing room comedy’. The rumbustious, rollicking good humour of sections of Overture to a Kitchen Comedy is apparent in much of his music and represents one side of his nature.

The Rhapsody under a High Sky depicts the ‘high skies’ of the cloudscapes in Paul Henry’s paintings and expresses a sensitivity to orchestral colour and harmonic nuance that represents another side of his nature. These two works demonstrate in his music the truth of Alec Reid’s description of Potter in the opening quotation.

Potter also won the 1953 Carolan Prize with his concerto for piano and orchestra, Concerto da Chiesa, a work which he used to convey some of his attitudes to war – he was badly affected by post-traumatic stress disorder (PTSD) as a result of his WW2 experiences and it would surface as part of the music in some of his most significant works, including the Concerto da Chiesa, the 1968 Sinfonia “de Profundis” and the 1975 cantata The Cornet of Horse. In a letter in 1974 to a correspondent interested in the ‘evolution’ of his style, Potter wrote,

I do try to make each composition a kind of biographical chapter – to which only I may have the key […] since then [the early 1950s] I’ve been busy, like I said, putting down my recollections of the previous quarter century down into music.

Winning these significant composition prizes at the beginning of the 1950s quickly established Potter as a rising talent, with his facility as an arranger and a skilled orchestrator finding favour with Radio Éireann, who commissioned him to make hundreds of orchestral and choral arrangements of Irish traditional tunes under a Government directive to preserve and disseminate the country’s musical heritage: in the late 1940s/early 1950s Irish traditional music was perceived as at risk of being forgotten. For Potter it was a useful source of bread-and-butter income, but he was constrained by the restrictions imposed on him in terms of harmonic adventurousness and by the abilities of the ensembles. Also, such work reduced the number of original compositions, of greater musical value and individuality that he could have written. Gael Linn recorded a number of his orchestral arrangements in the 1970s on an LP, later reissued as a CD, called Ceol Potter.

Throughout the three decades of Potter’s life near Dublin, Radio Éireann (later RTÉ) broadcast several programmes a week featuring orchestral and choral arrangements (as well as original works) by Potter and other Irish composers, and the work and the public exposure was a valuable part of the professional composer’s career[1]. Potter’s many original works for orchestra include a concerto or concertino for every instrument, written for the musicians of the RTÉ Concert Orchestra.

One of RTÉ’s more unusual commissions was that given to Potter in 1962 - to compose an opera for television. Patrick (libretto by Donagh McDonagh) was first broadcast in 1965. A clip is available from RTÉ Archives.

One of Potter’s last works was an anthem, Clamos Cervi (‘The Deer’s Cry’ from The Breastplate of St Patrick), commissioned for the opening service of the First Dublin International Organ Festival in 1980. There are melodic and harmonic motivic similarities with his other ‘Patrick’ works, including the opera Patrick and the cantata Lúireach Phádraig

In an interview on RTÉ Radio with Andy O’Mahony in the ‘Music and the Musician’ series in the 1970s Potter talked about the deeply personal significance he attached to a number of his works, stating that the Concerto da Chiesa expressed what he felt about all wars, the Missa Brevis expressed what he felt about all faiths, the Sinfonia “de Profundis” about personal problems and the Elegy for Clarinet and Strings about the loss of loved ones.

The Sinfonia “de Profundis” was composed in 1968 to an RTÉ commission and first performed on 23 March 1969. He wrote it as a thanksgiving for deliverance (specifically, from a bad bout of alcoholism) and this remarkable work speaks to an audience very personally. The audience response to the first performance was unprecedented, achieving rave reviews in all five Dublin newspapers and resulting in Potter being awarded a special Jacobs Broadcasting Award. As he wrote in a letter after the first performance:

We have just finished a rather full few weeks in getting my one and only symphony off the ground. That was last Sunday night, and as you can see from the enclosed cuttings, it was some night. The boys and girls were quite right: it was a hum-dinger of a performance, but the orchestral ensemble was nothing compared to the critical togetherness that took place next day […] a united rave from all five of them is definitely one for the book. Funny, isn’t it. You sit down sometime and write some scintillatingly brilliant little piece designed to do nothing but enchant and amuse your darling public – and the so-and-sos sit on their hands like mutes at a funeral. And then you pen a solemnly cogitative piece that spends the time in gloomy reflections about the mortality of man and such-like cheerless subjects, dress it up in the most austerely recondite musical idiom that you can think of — and the audience proceeds to raise the ruddy roof!

Potter gave a radio interview about his Sinfonia “de Profundis” a few days before its first performance.

The most recent performance of the Sinfonia ”de Profundis” was by the RTÉ National Symphony Orchestra, conducted by Kenneth Montgomery, on 12 October 2018, which is currently available through RTÉ.

Forty years after the symphony’s first performance in 1969, Richard Pine wrote in his 2010 biography of Charles Acton: ’There is little question that ‘Sinfonia de Profundis’ retains its distinction as one of the most, if not the most, important full-scale symphonic works by any Irish composer.’ Also in his biography of Charles Acton, Richard Pine made another assessment of Potter’s Sinfonia “de Profundis” whilst writing about Acton’s professional relationship with Brian Boydell: ‘[Boydell’s] violin concerto, considered by many as ranking with May’s string quartet and Potter’s Sinfonia de Profundis as the three most important compositions of twentieth century Ireland.’

Potter’s stage works include ballets written for Patricia Ryan’s Irish National Ballet Company in the early 1960s, most notably, perhaps, Careless Love, with a scenario by Donagh McDonagh. He also wrote a three-act opera called The Wedding (Potter’s original title was The Emigrants). He had had it in mind for nearly thirty years before an Arts Council bursary enabled him to write it in 1979. It was premiered posthumously in the Abbey Theatre in 1981 and performed again a few years later by DIT College of Music. It is overdue for a new production and the national and international recognition that it merits.

Archibald James (Archie) Potter was the son of a blind Belfast piano tuner.