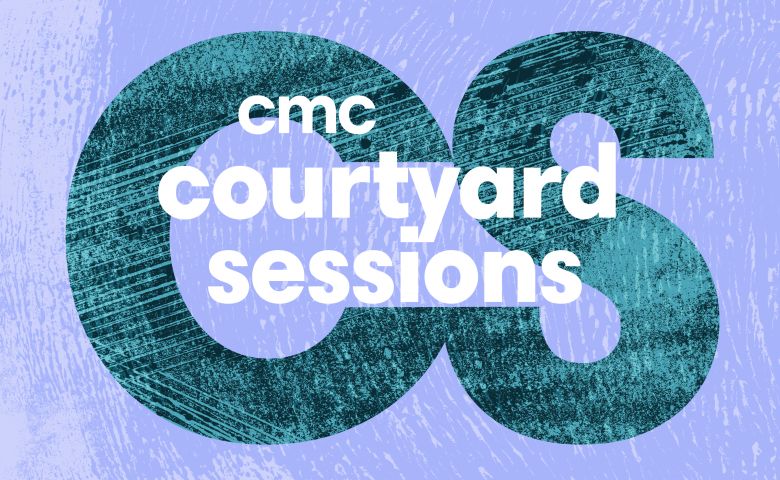 Available to watch at cmc.ie/bloomsday2021

The first event in a new series presented by CMC features a new work created by composer and saxophonist Nick Roth alongside flautist Lina Andonovska and trombonist Colm O’Hara. This event is presented in association with the Embassy of Ireland, Hungary.

The work was recorded especially for Bloomsday 2021, and is presented as part of CMC’s Courtyard Sessions, a short series of outdoor performances in June and July recorded in CMC’s Courtyard.

This Joycean-inspired programme for the Contemporary Music Centre’s Bloomsday 2021 celebrations is comprised of three interwoven sections with coda.

The set opens with an interpretation of the last six hundred and eight words of James Joyce’s ‘Finnegans Wake’ (Faber & Faber, London, 1939) from Imlamaya to a loved a long the, in so much as the wake can ever really end, its cyclical form a perpetual cyclum aquavocum, forever writing the river Anna Livia out to the Sea to return again, riverrun.

In its first incarnation, the piece, entitled ‘A Way A Lone A Last’ (2015) was composed for recorder trio. It then transmutated into a solo work for flute (with flamenco footwork) under the new title ‘A Loved A Long’ (2017). The Bloomsday trio version premiered in the CMC is succinctly titled ‘the’ (2021) – thus finally spelling out the closing sentence of the book across all three iterations.

The second section serves as a prélude to the third – we perform Louis Couperin’s first ‘Prélude non Mesuré’ in D minor whilst Cathy Berberian recites the Sirens chapter from Ulysses and James Joyce himself reads from the Aeolus episode. During rehearsals we discovered to our delight that Cathy Berberian’s interpretation revels in the sibilance of the last ‘s’ in a remarkably similar way to our treatments in ‘the’.

In his essay ‘The Art of the Fugue: A Sirensong in Ulysses’, Christopher Shera writes – “At the heart of the daedal labyrinth of Ulysses lurks no minotaur, but rather a poignant contrapuntal fugue. In the boneheaped sentences of Sirens, Joyce’s voices, the “enchanters of all mankind and whoever comes their way”, emerge into music from the silence of words on a printed page.”

Our third section explores the contemporality that Joyce intimates through his fugal treatment of interwoven melodies throughout the chapter.

In her essay ‘Musical Form as Narrator: The Fugue of the Sirens in James Joyce’s Ulysses’ Nadya Zimmerman writes – “One of the reasons the chapter has drawn such attention is that Joyce himself gave few indications as to its structure. Evidence has revealed only two mentions of formal technique with respect to “Sirens”: Georges Borach recalls a conversation on 18 June 1919 in which Joyce noted, “I wrote this chapter with the technical resources of music. It is a fugue with all musical notations.” Later that same year, on 6 August, Joyce wrote a letter to Harriet Weaver revealing a few more specifics as to the form of “Sirens”: “They are all the eight regular parts of a fuga per canonem: and I did not know in what other way to describe the seductions of music beyond which Ulysses travels.”

A huge range of musical references are employed in the chapter, which we dove into freely as source material for our improvisations. The careful reader will of course be expecting ‘The Croppy Boy’, as it is so centrally positioned to the action of the novel in this moment, but the careful listener might also catch snippets of the ‘Menuetto’ from Mozart’s ‘Don Giovanni’, John McCormack’s version of ‘Goodbye Sweetheart Goodbye’, or the aria ‘M’apparì tutt’amor’ from Friedrich von Flotow’s ‘Martha’. In all there are eight themes…one for each of the characters…but of course it would be giving the game away to name them all here…

Finally, we close the set by returning to ‘the’ by way of the “gulls, far calls”, some of which were responses to the real seabirds circling above the courtyard during the performance.

We very much hope that you enjoy the music, and offer our thanks to all of the staff at the Contemporary Music Centre, Dublin and the Irish Embassy, Budapest for their kind invitation to present this programme.

Nick Roth is a saxophonist, composer, producer and educator.