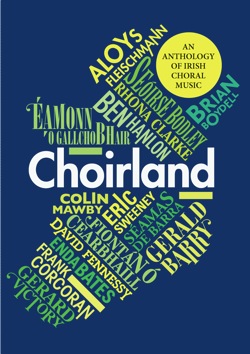 Minister of State for the Gaeltacht Dinny McGinley launched a new collection of Irish choral music at the Arts Council on 18 October 2012.

The publication, Choirland: An Anthology of Irish Choral Music, is a collection of 15 pieces by Irish composers for unaccompanied mixed choir. Published by the Contemporary Music Centre (CMC), the collection has been produced in partnership with the Association of Irish Choirs (AOIC) and the National Chamber Choir of Ireland (NCC) with funding from The Arts Council/An Chomairle Ealaíon.

The music ranges in difficulty from the simple to perform, to the more challenging. From arrangements of traditional melodies, new settings of familiar texts and strikingly original works, the selection encompasses a wide array of styles, which illustrate the diversity and vibrancy of Irish choral music. Each piece is presented with performance notes designed to aid conductors and singers alike, and the book includes a CD recording of the music by the National Chamber Choir of Ireland conducted by its Artistic Director Paul Hillier.

Choirland is available to purchase from CMC’s Online Shop and direct from the Centre.

View an interview recorded at the launch with Evonne Ferguson, CMC Director, and Majella Hollywood, CEO of the NCC about the publication.

Photos from the launch