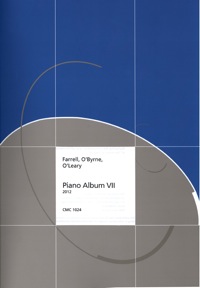 Three new works for piano have been published by CMC. The works have been commissioned by RTÉ lyric fm as test pieces for the 2012 Dublin International Piano Competition, which runs from 4–15 May 2012.

Composers Eibhlis Farrell, Breffni O’Byrne and Martin O’Leary have written pieces and each competitor who reaches the semi-finals chooses one of the works to include in his or her programme in the National Concert Hall. The semi-final takes place on 12–13 May.

Breffni O’Byrne’s Rhapsody takes an Irish song called Bruach Dhúin Réimhe as its inspiration and the composer uses it as a catalyst to generate new musical material. The piece begins meditatively and evolves into an intense jig before ending calmly with an air of unease. The work is dedicated to Deirdre Kelleher.

Gleann na Sídhe – The Fairy Glen by Eibhlis Farrell is an atmospheric work inspired by the lore surrounding the fairies (Na Síóga). The Fairy Glen in Rostrevor, Co. Down, is an area of outstanding natural beauty where mountain, river, woodland, meadow and sea merge the human world with the fairy world. The piece is dedicated to Carmel Naughton.

Martin O’Leary’s Blue Toccata mixes bravura elements associated with toccatas by Bach, Schumann and Prokofiev with blues music. The piece, which is dedicated to Margaret Downes, is made up from a series of short ideas or riffs and is concerned with a synthesis of virtuoso considerations with the composer’s own personal musical landscape.

Copies of Piano Album VII are available from our online Shop, price €25.00 plus postage and packaging.