Through the Digital Door: Works for Symphony Orchestra (part 1) 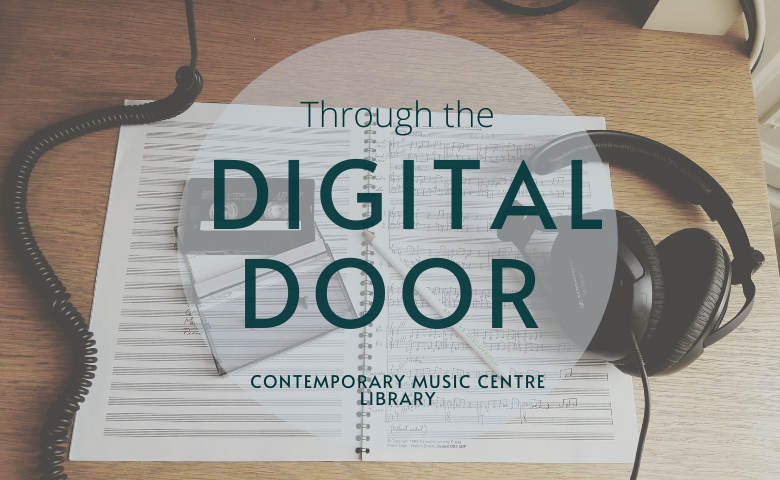 This work was premiered by violist Lawrence Power with Britten Sinfonia and conductor Thomas Adès in 2019, in a concert with Beethoven's 7th and 8th symphonies. The work received its Irish premiere by the RTÉ Concert Orchestra, with Lawrence Power and conductor Ilan Volkov, at New Music Dublin in 2020. The composer reflects on this work:

This work was premiered by violist Lawrence Power with Britten Sinfonia and conductor Thomas Adès in 2019, in a concert with Beethoven's 7th and 8th symphonies. The work received its Irish premiere by the RTÉ Concert Orchestra, with Lawrence Power and conductor Ilan Volkov, at New Music Dublin in 2020. The composer reflects on this work:

This work is published by Schott.

Composed in 1975, this work received its premiere at the sixth Dublin Festival of Twentieth Century Music by the RTÉ Symphony Orchestra with conductor Proinnsias Ó Duinn. Shown here in its original handwritten score, this work was typeset and performed as part of the 2016 RTÉ Composing the Island festival, which celebrated a century of music in Ireland. 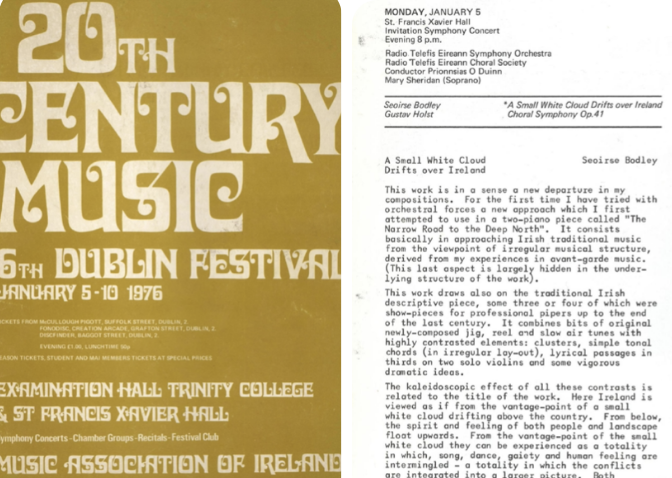 The title of this work is suggestive rather than directly programmatic - as if the ethos and spirit of the people and the land were viewed from the vantage point of a small white cloud drifting over Ireland. This one-movement orchestral work makes extensive use of traditional Irish music idioms and contrasting material, fitted, as befits such material, into an irregular, rather than regular, musical form. In all, this is a musical picture of the ethos of Ireland, formed at a viewpoint from which a new synthesis can be discerned. 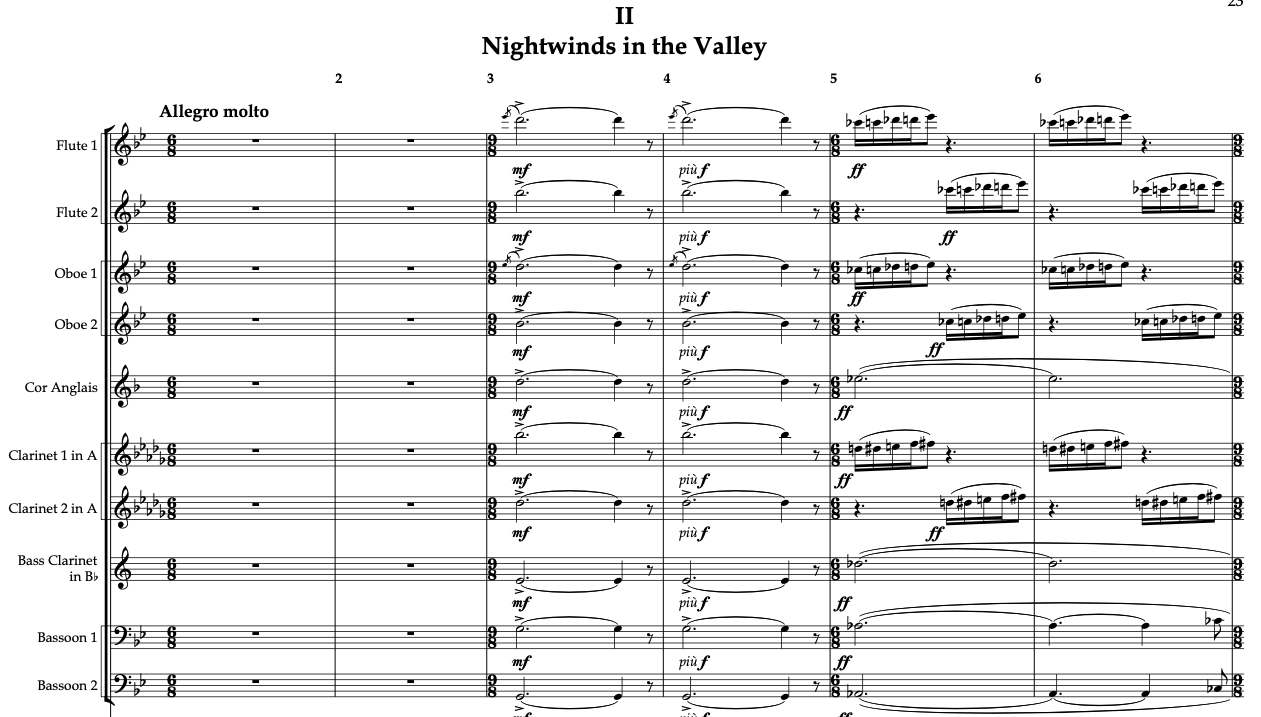 This work consists of three movements: On Lacken Hill (molto moderato); Nightwinds in the Valley (Allegro molto) and Above Lough Bray (Adagio). The second and third movements were first composed as a suite in 1924-1925, with a first movement added in 1927. The entire work was revised in 1928 and 1937. The full symphony was not premiered as a complete work until its performance by the RTÉ Concert Orchestra in RTÉ's Composing the Island Festival in 2016. 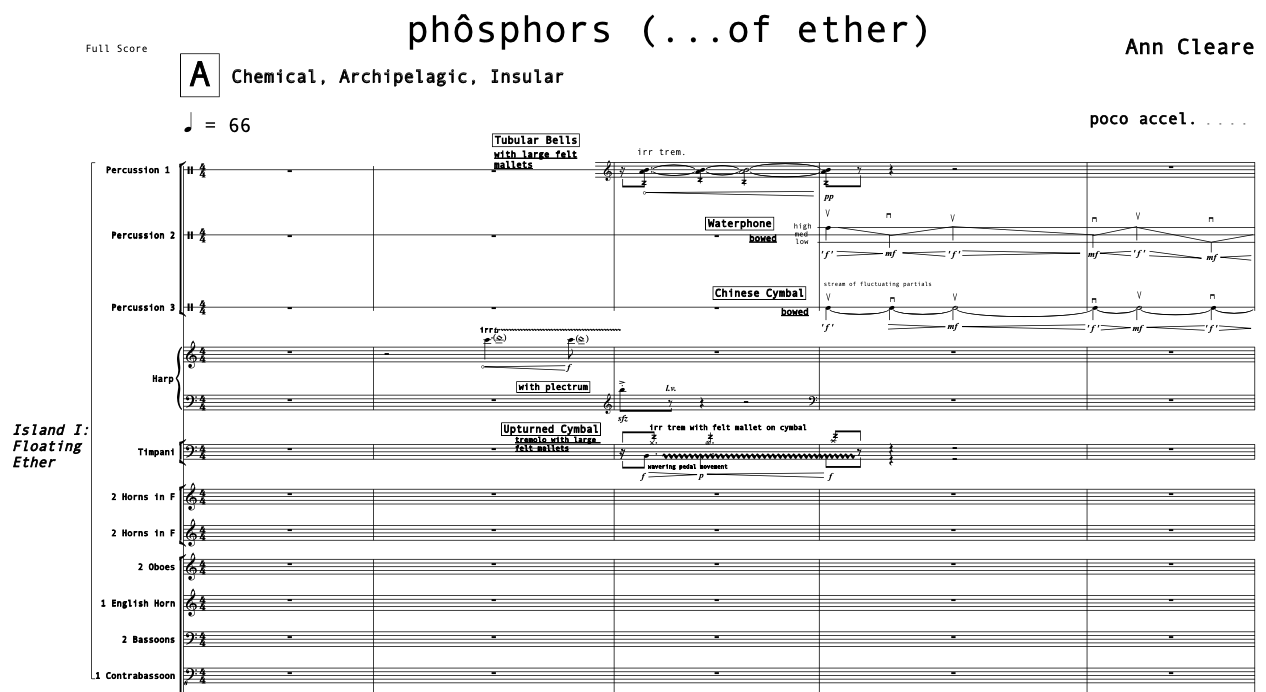 This work was premiered by the RTÉ National Symphony Orchestra, with conductor Gavin Moloney at RTÉ's Horizon Series in February 2013. The work comprises of three instrumental 'islands', which do not know of each other's existence.

These islands have been designed with particular registral, harmonic, and timbral characteristics, behavioural qualities, and temporalities that are unique to each island.

The suite is illustrated by four progressively funnier dogs, inspired by the Gerald Barry Organ Concerto.

Diffractions was premiered by the RTÉ National Symphony Orchestra and conductor Gavin Moloney in an RTÉ Horizons Series concert in January 2015.

Diffractions is part of a series of pieces loosely based on the work of the prominent nineteenth-century physicist John Tyndall, a native of my home town of Leighlinbridge, Co. Carlow, Ireland. This work is not intended to be programmatic, rather taking its initial inspiration from some aspect of Tyndall’s work, but developing thereafter as purely abstract music. 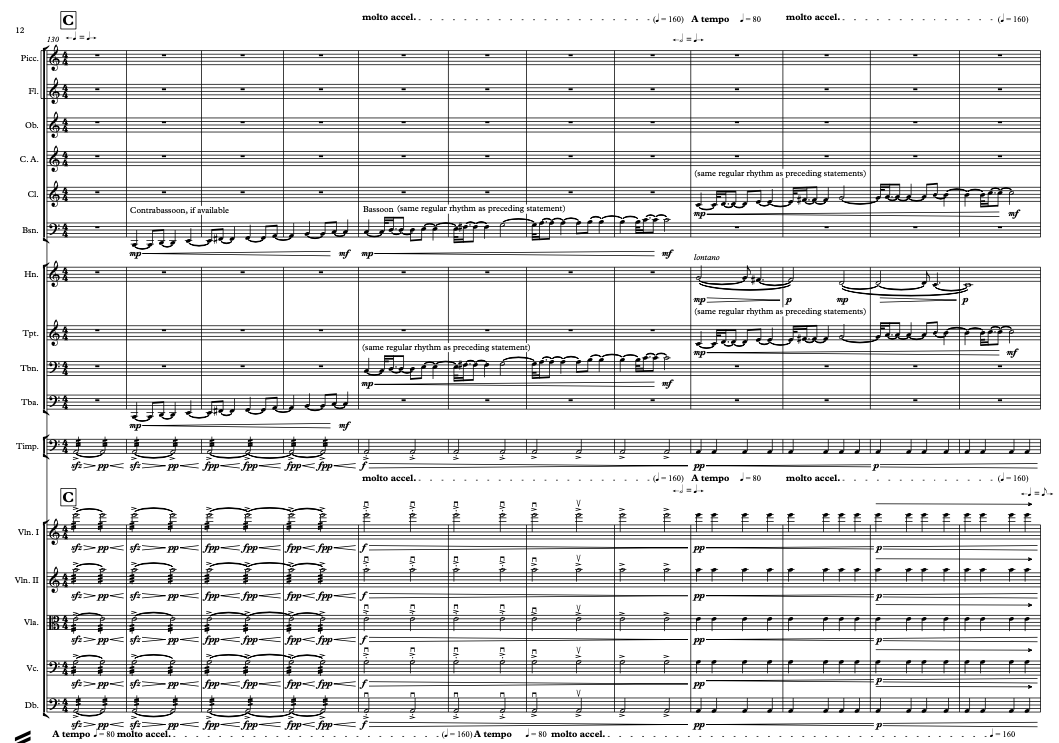 I am fascinated by the centuries-long tradition of using the orchestra as a metaphor,—for heavenly choirs, civil society, the army, the human body, nature, machines—so I wanted the input of the Kensington Symphony Orchestra to update the metaphor of the orchestra for the twenty-first century; to this end, I devised a survey where the players suggested modern metaphors for the orchestra, which included the brain, a giant jigsaw, a multi-layered conversation, the European Union, and a railway terminal. Most of the suggestions, however, chimed with my own idea for an orchestral metaphor, of a collective intelligence or a unified consciousness, a Hive Mind.

This four-movement symphony was commissioned by RTÉ and premiered by the RTÉ National Symphony Orchestra an conductor Proinnsias Ó Duinn in November 1992. The third movement's scherzo is based on Carolan's Lament for Charles MacCabe.

The general idea was to sketch some impressions of the four Irish provinces in the order in which they are likely to be touched by the prevailing South-West wind: Munster, with its high peaks and broad fertile grasslands; Connacht, with contrasts of warmth of feelings and sharply etched horizons; Ulster, where human tragedy overshadows all other impressions, and Leinster, where there has been such strong centralisation. 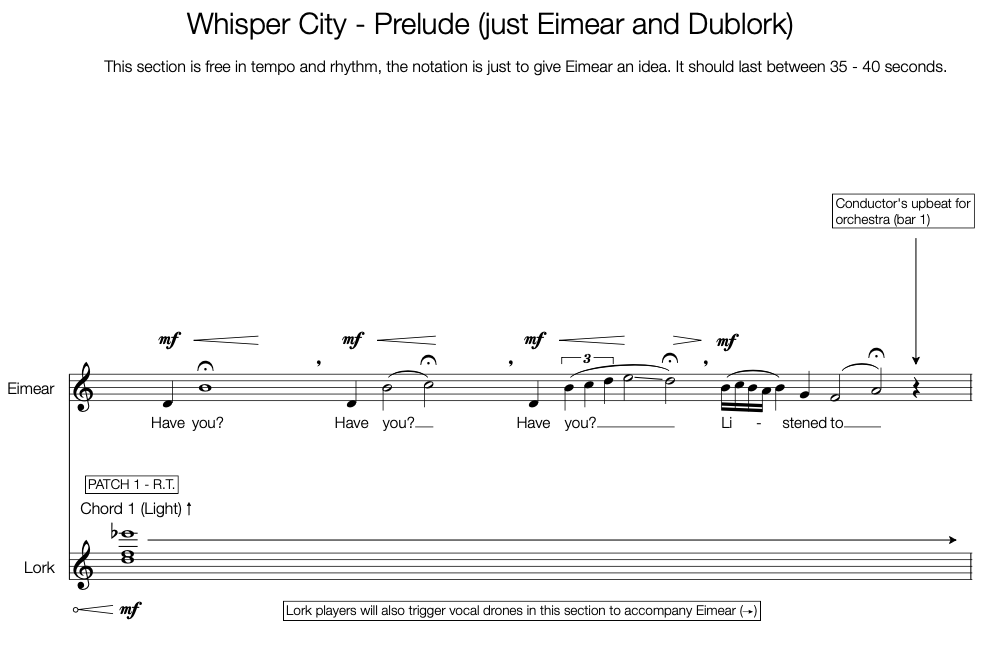 This work is scored for voice, symphony orchestra and laptop orchestra, and was commissioned by the RTÉ NSO with additional assistance from the Dublin City Council Tyrone Guthrie Award and Artist Bursary Award. It was premiered by Eimear Quinn (voice), the RTÉ NSO, Dublin Laptop Orchestra and conductor Gavin Maloney in October 2012. This work takes its inspiration from the US podcast whispercities and explores the secret music of Dublin streets. 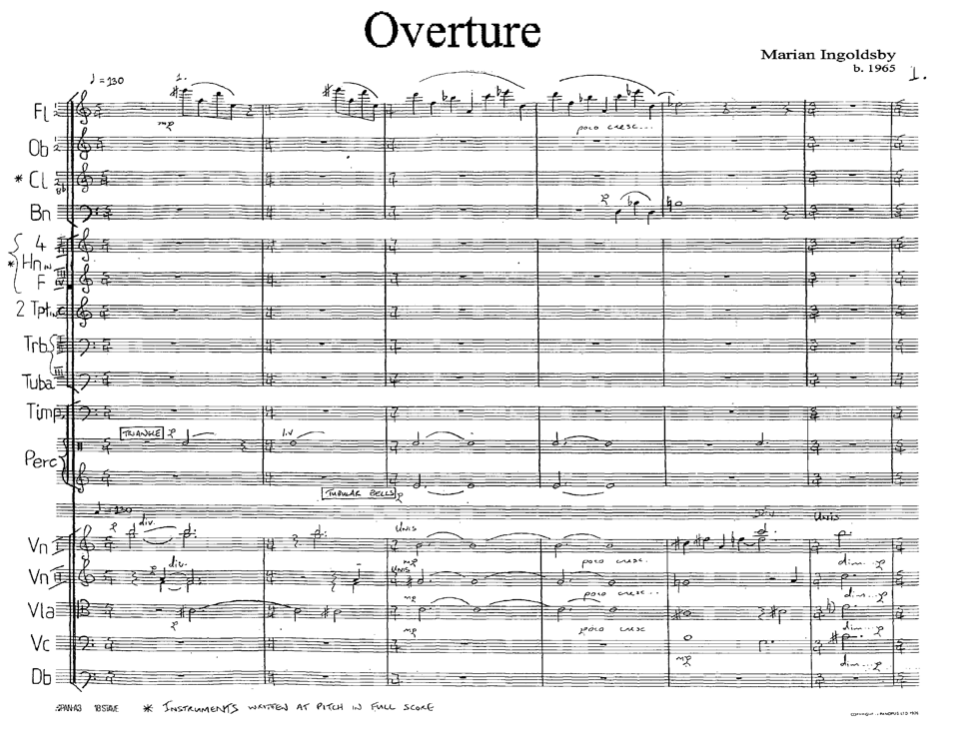 This work was commissioned by RTÉ for performance by the RTÉ NSO and the Ulster Orchestra. It was premiered by the RTÉ NSO and conductor Colman Pearce in February 1995. The work is inspired by lines of a poem of the same name by Thomas Kinsella.

Some lines from this poem provided the main ideas for the piece, for example; '...a major triad of strings...trombones...released from all earthbound tonalities'. Harmonics are generated from the juxtaposition of major and minor triads. Since the triad is associated with the key, it is placed here in very unusual settings in order to create an ethereal or unanchored effect.