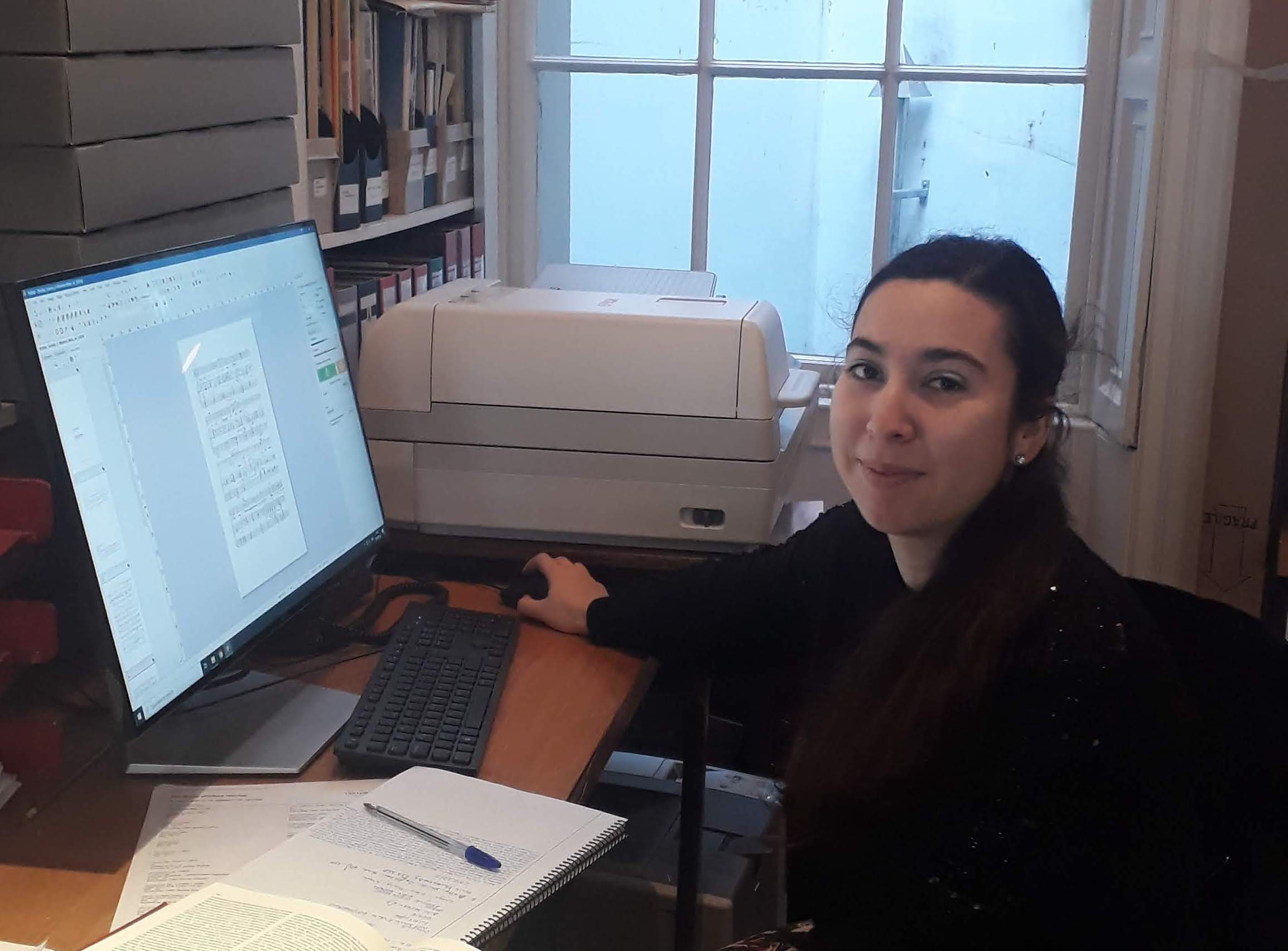 A guest post from Spanish pianist and musicologist Soledad Sánchez Palomo, currently studying an MA in Performance and Musicology in Maynooth University.

In the Contemporary Music Centre I have had the incredible opportunity to work on an interesting digitisation project, where, as a Spanish pianist and musicologist, I have been able to get to know Irish contemporary music a little better, specifically through the works and articles of composer Seóirse Bodley and with the help of CMC Library Co-ordinator Susan Brodigan and Production Co-ordinator Keith Fennell. 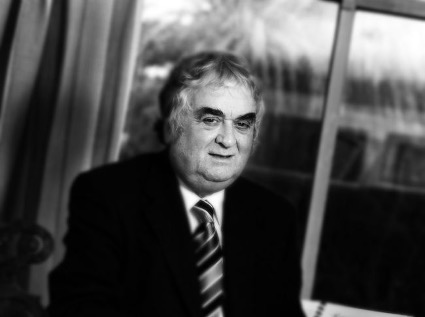 First, after obtaining a list of Bodley works to be digitised, I selected those pieces that, from my pianist's perspective, caught my attention. Therefore, the four works I chose for this project were:

I also digitised two articles and three programme notes for a more complete understanding of Bodley's compositional style and works:

The works chosen are for piano solo or for voice and piano. They cover a period of 49 years between the earliest (1950) and the most modern (1999). Thus, I have been able to go on a tour of the author's compositional development. According to White, Harry and Boydell, Barra, The Encyclopedia of Music in Ireland. Vol. I (Dublin: University College Dublin Press, 2013), pp. 104-107:Bodley is one of Ireland's most important composers, and his engagement with both Ireland's Gaelic cultural heritage and the European avant-garde has had a profound effect on his extensive compositional output, in particular his attempts to achieve a synthesis of Irish traditional music and modernism.

The first selected work O Mistress Mine dates from 1950 and corresponds to the first stage of the composer, while still studying composition privately with Hans Waldemar Rosen. This song for baritone and piano uses the text of Act II, Scene 3 of the comedy Twelfth Night (1601-2) by William Shakespeare (1564-1616):

O Mistress Mine, where are you roaming?
O stay and hear! Your true love's coming,
That can sing both high and low.
Trip no further, pretty sweeting;
Journeys end in lovers meeting.
Every wise man's son doth know.
What is love? 'tis not hereafter;
Present mirth hath present laughter;
What's to come is still unsure;
In delay their lies no plenty;
Then come kiss me, sweet and twenty,
Youth's a stuff will not endure. 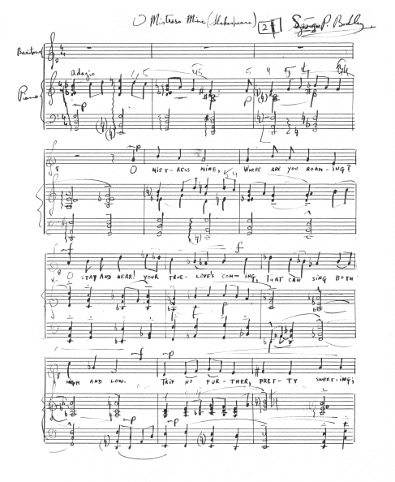 After continuing his studies with Johann Nepomuk David at the Staatliche Hochschule für Musik in Stuttgart and attending the Internationale Ferienkurse für Neue Musik in Darmstadt between 1863-5, Bodley wrote an article that is key to understanding all his subsequent output. In 'A Composer's View', written in Music Supplement on the 3rd December, 1964, Bodley wrote:

Perhaps this points towards a growing awareness in Ireland of the importance of being informed as to the latest developments among the avant-garde. In the past, Irish composers have most often discussed the question of the relationship of folk music to art music. 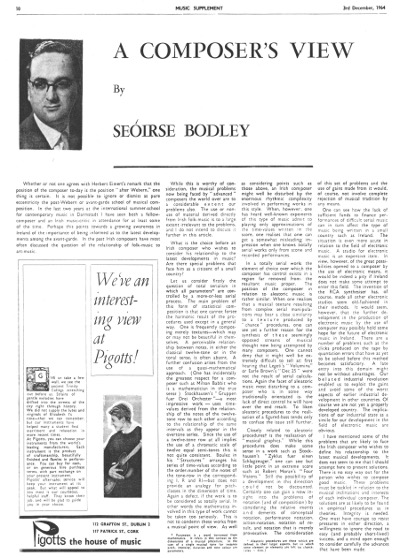 All this thought is clear in the next digitised work, The Tightrope Walker presents a Rose, where the composer himself in the programme notes describes the piece as a work based on aspects of traditional Irish music contrasted with other musical thought.

'Those frame and contrast with the Irish musical elements to form a whole in which there are sharp contrast and hard edges.' 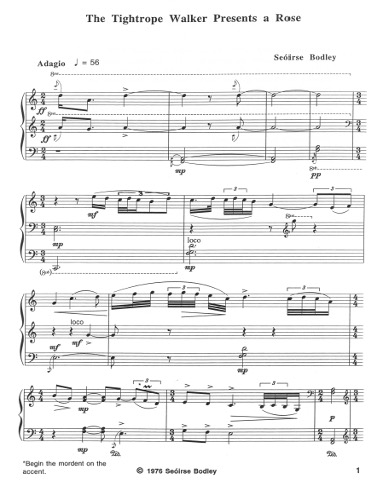 At the next level of his compositional process, one of the features of Bodley's scores during the end of the 60s and 70s is his concern to evolve new types of musical notation to indicate relative durations, as it can be seen in some of the works that stand out at this time: String Quartet no. 1 (1968) and Meditations on Lines from Patrick Kavanagh (1971), where he comprises five movements inspired in Kavanagh's poetry. His fourth movement, in this version for mezzo-soprano and piano, is the following digitised work, Canal Bank Walk (1986), whose text is as follows:

Leafy-with-love banks and the green waters of the canal
Pouring redemption for me, that I do
The will of God, wallow in the habitual, the banal,
Grow with nature again as before I grew.
The bright stick trapped, the breeze adding a third
Party to the couple kissing on an old seat,
And a bird gathering materials for the nest for the Word
Eloquently new and abandoned to its delirious beat.
O unworn world enrapture me, encapture me in a web
Of fabulous grass and eternal voices by a beech,
Feed the gaping need of my senses, give me ad lib
To pray unselfconsciously with overflowing speech
For this soul needs to be honoured with a new dress woven
From green and blue things and arguments that cannot be proven. 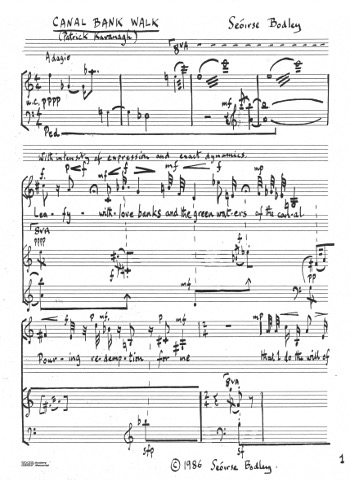 At the beginning of the 90s, after having composed several of his major works, like many of his symphonies, the composer's musical language returns to recover some of the serial and post-serial techniques in three piano works which stand out for their great virtuosity and technical difficulty. In them, Bodley employs many of the idioms he learned during his visits to Darmstadt and attract attention because he does not allow the tonal element within his rows of more than 12 notes. These works are: News from Donabate (1999), An Exchange of Letters (2002) and the last digitised piece in this project, Chiaroscuro (1999).

Chiaroscuro was commissioned for the 2000 AXA Dublin International Piano Competition with fund provided by the Arts Council. This piece, as he states in the programme notes:

Takes as its starting point the Caravaggio painting The Taking of Christ 1602 in the National Gallery, Dublin. 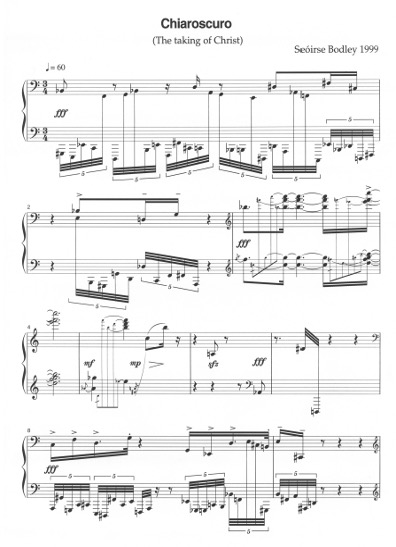 Chiaroscuro literally means 'light-dark' and refers to the style of painting in which predominantly dark tones are contrasted with light ones which as a result stand out in great contrast. The work are based on a fifteen-note row that requires the pianist a great technique that demonstrates the contrasting colours that appear in a very rapid succession throughout the score.

Finally, the second digitised article is 'Examining the great divide' by Malcolm Barry, made for Soundpost number 16, published in Oct. /Nov. 1983. This article is a great summary of all Bodley's output up to that moment, emphasizing at all times the original and intelligent way in which the composer combines the typical elements of traditional Irish music with other elements more typical of modernism and the European avant-garde.

'A composer, if he is to express himself truthfully and without yielding to the pressures of fashion or without being deceived by superficial and false theorising about the necessity of internationalism in art in the present technological age, will do so within the framework of musical turns of phrase which have resulted, from the the basic vocal music of his own nationality'. 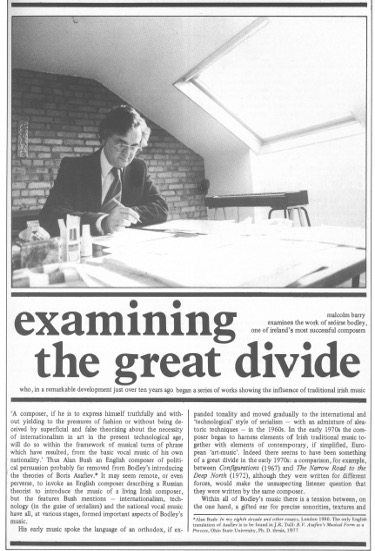 Today, Seóirse Bodley is a very important composer in Ireland, as stated by Harry White and Barra Bodley, therefore, it is observed how several of his works were performed during the concert cycle that took place between 7 and 25 September 2016 to commemorate the century of music in Ireland, under the title Composing the Island, and whose programs have also been digitised. Those works were: Configurations (1967) and A small white cloud drifts over Ireland (1975) at the concert on September 16; Quartet No. 1 (1968) performed on September 18 and Two Aíslingí (Nos. 1 and 5) (1977) at the concert on September 22. 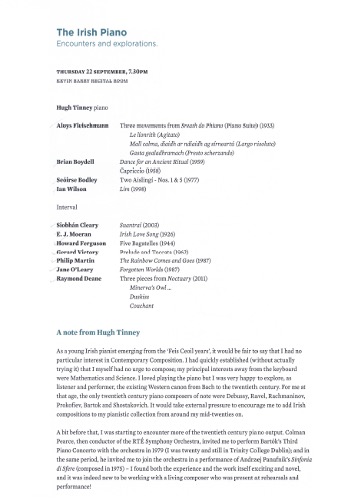 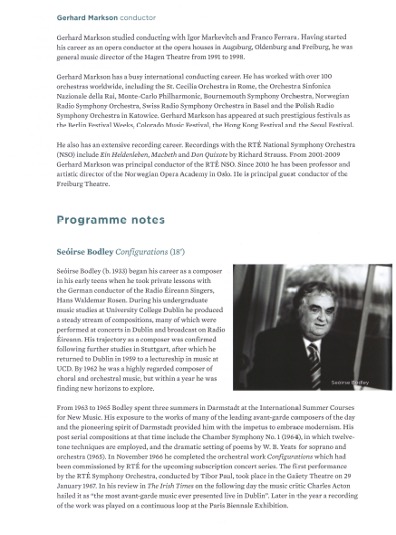