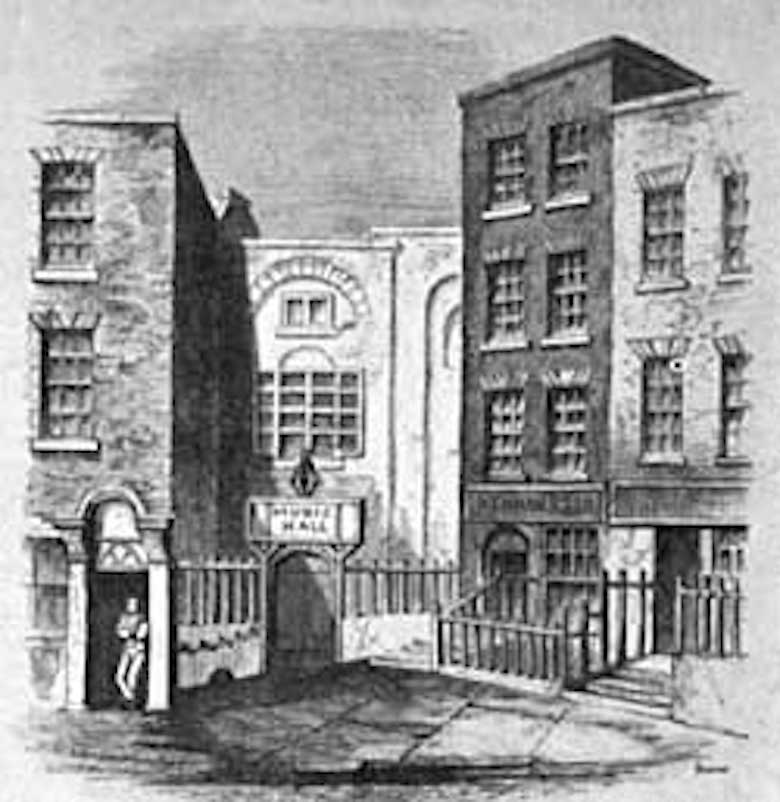 Housed since its foundation in 1986 in rented offices in Baggot Street, over the years the Centre has expanded from occupying one room to two rooms to two floors. With activity and staff expanding all the time, it became obvious some time ago that if growth continued at the same rate, a new and more spacious permanent home was imperative.

And so the Board and the Centre's director, Eve O'Kelly, set about the campaign to raise funds and identify a suitable building. Since then it has been three years of hard slog, making funding applications to every conceivable grant-giving body on the island and thinking and re-thinking the needs of a music information centre such as CMC.

'It's quite a difficult exercise trying to forecast what the future needs of an organisation such as ours will be', says Eve O'Kelly, 'particularly because technology is changing so fast. For instance, already some composers are giving us computer disks of their music in preference to scores, so it's quite possible that in the not so distant future we won't have a library of sheet music to house any more. We may well have everything on computer and visitors will access scores and recordings on a terminal rather than going through shelves full of music. Indeed, when that day comes they won't need to visit us at all, they'll be able to access the whole collection remotely over the Internet.'

For the immediate future, however, it was decided that there was still a need for the more traditional services of a music information centre: a pleasant public library and listening facilities, archival storage space for the score collection and sound archive and adequate office accommodation. A ground floor 'shop window' presence was also a priority, as was disabled access. And little details like central heating, hot water and draught-proof windows were on the staff's wish list -- facilities not available in the current offices.

Having considered many alternatives, including moving out of Dublin altogether, the Board's working party drew a circle on the map of central Dublin and the search within that area started in earnest. The very buoyant property market of recent years did not help and it became clear that either to rent or to buy premises with adequate space was going to be expensive. The Arts Council was approached with a view to obtaining capital funding and a dialogue was opened up about the needs of CMC. Co-incidentally, in February of 1998 Temple Bar Properties, the semi-state development company handling the rejuvenation of Dublin's cultural quarter, got in touch to say they were looking for an occupant for a listed Georgian house in need of renovation. ' "In need of renovation" was an understatement', laughs Eve O'Kelly. 'It was totally derelict, with the whole top storey and roof missing and floors and walls completely gone. It took quite a stretch of the imagination to see what it might become, but we felt it had potential and we liked the location.'

A particularly nice link was the fact that it was on Fishamble Street, where the first performance of Handel's Messiah was given in April 1742.

'It's very appropriate to our work on behalf of composers that the new Centre is on a street so closely associated with the premiere of a work like that', says O'Kelly. 'It's a strange feeling to think of Handel walking up Fishamble Street 250 years ago to rehearse in Neal's Music Hall, and the audience pouring in later to hear Messiah for the first time, leaving their hoops and swords behind as we're always told, to accommodate the crowd.'

And so with a building identified, a funding application to the Arts Council was successful and the restoration of Kennan's House, as it is known, by Temple Bar Properties and the Contemporary Music Centre, got underway. Built originally by the old Dublin metalworking firm of Kennan & Sons, the house dates from the 1830s, incorporating part of an earlier house of the 1790s. The building is now jointly owned by Temple Bar Properties and the Contemporary Music Centre, an arrangement which secures the future of CMC by ensuring that it can realise its assets if, in the future, it needs to move again. The restoration has been managed by Temple Bar Properties, with advice from the Dublin Civic Trust to ensure that it is faithful to the period. The architects and engineers have donated their services to the project and over recent months the building has undergone a transformation, coming back to life as the unpretentiously elegant house it once was.

We're really looking forward to moving in', says Eve O'Kelly. 'Although it's going to be an appalling upheaval packing and unpacking everything, we've been planning every little detail of the interior and the facilities for so long that it's going to be wonderful to see it all finished at last. It's another huge leap in the development of the Contemporary Music Centre, and the Arts Council and Temple Bar Properties have been excellent partners in the project. There were times when I thought we'd never get there, but it's been worth waiting for and I'm hoping we'll have Handel's benevolent ghost with us to bless the work.'

The Contemporary Music Centre moves to 19 Fishamble Street, Temple Bar, Dublin 8 in February 2000. Fishamble Street is in the West End of Temple Bar, running up from the Liffey beside Dublin Corporation's Civic Offices and intersecting with Lord Edward Street beside Christchurch Cathedral.