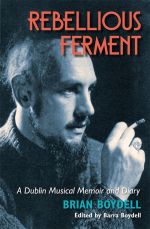 Brian Boydell (1917 – 2000) was a leading figure in Irish musical life. Composer, performer, broadcaster, agitator for music, musicologist, and Professor of Music at Trinity College Dublin, he profoundly influenced the development of music and music education in Ireland. In his later years he wrote his memoirs focusing in particular on the 1940s and early 1950s (but extending to the early 1970s) when he was closely involved in what he describes as ‘that remarkable period in the history of artistic development in Ireland during the Second World War and shortly afterwards’, a period he also refers to as one of ‘rebellious ferment’ in Irish cultural life.

Brian Boydell’s memoir, together with extracts from the diary he kept for part of 1950, have been edited by his son Barra Boydell, who established his own career as a prominent musicologist and a professor of music at Maynooth University. Informative, entertaining and written with an engaging combination of passion and elegance, this is a highly readable book. It presents a vivid portrait not only of artistic life (including painting, poetry and theatre as well as music) but also of politics, religion, infrastructure, education and society in mid-twentieth-century Ireland. Brian Boydell presents a captivating account of his engagement with a wide range of often colourful people, including those associated with the White Stag Group in the early 1940s, and the European musicians who settled in Ireland and contributed so much to Irish musical life from the late 1940s. This book presents a fascinating account not only for its autobiographical interest, but also for its value as a first-hand witness of a significant period in Irish musical and cultural history. Barra Boydell is Emeritus Professor, Department Of Music, Maynooth University and was co-editor with Harry White of the Encyclopaedia of Music in Ireland.