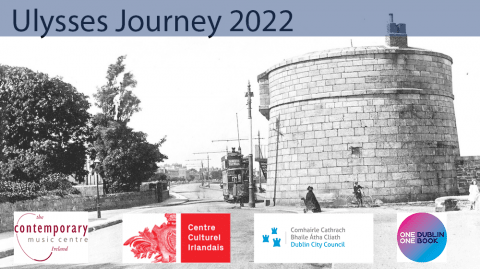 The 100th anniversary on 2 February 2022 of the publication of Ulysses by James Joyce will be celebrated all over the world. In light of the importance to Dublin and Ireland of this milestone in world literature, the Contemporary Music Centre, Ireland is planning an international celebration Ulysses Journey 2022. Given Ulysses’ connections with Ireland, France (where it was published) and Hungary (through the character Leopold Bloom), Ulysses Journey 2022 will start in Dublin on 2 February 2022, and will journey to Belfast and back to Dublin in early February 2022, onwards to Budapest for Bloomsday 2022, and will end in Paris on 18 June 2022.

A number of new works by composers from Ireland, which are inspired by, reflect on and/or respond to Ulysses, together with films by filmmakers from Ireland to accompany these new works, will be co-commissioned by CMC and the Centre Culturel Irlandais, with support from the Department of Foreign Affairs and One Dublin One Book 2022, specially for the 100th anniversary of the publication of Ulysses.

These new Irish works and films will be screened in the following cities:

Details of these Music Commission Opportunities

Timeline for ‘Ulysses Journey 2022’, including these Music Commission Opportunities

These music commission opportunities are part of Ulysses Journey 2022, which also includes a concert tour at home and abroad of new and existing works by both Irish and Hungarian composers performed by Hungarian guitarist Katalin Koltai and Irish soprano Elizabeth Hilliard and a talk by CMC-represented composer Benjamin Dwyer in relation to Ulysses and Joyce in general to complement film screenings, the overall timeline for which is as follows:

Interested CMC-represented composers are invited to submit applications for consideration for one of these music commissions comprising:

Proposals should demonstrate the following:

Applications will only be accepted by email. Applications should be emailed to submissions@cmc.ie with the subject heading Ulysses Journey 2022.

CMC and its Ulysses Journey 2022 partners are committed to policies supporting equality and inclusion on the basis of Age, Disability, Gender, Marital/Civil Status, Family Status, Race, Religion/Politics, Sexual Orientation or membership of the Travelling Community.

If you have any questions, please contact Linda O’Shea Farren, Communications & Projects Manager at the Contemporary Music Centre, Ireland on losheafarren@cmc.ie.

The Contemporary Music Centre, Ireland is funded by the Arts Council of Ireland/An Chomhairle Ealaíon and the Arts Council of Northern Ireland’s Project Lottery Funding. These Ulysses Journey 2022 music and film works are co-commissioned with the Centre Culturel Irlandais as part of its Joyce Season (2 February - 20 June 2022) supported by the Irish Government through the Department of Foreign Affairs and the Decade of Centenaries 2012–2023 programme. These commissions are also supported by One Dublin One Book 2022 through funding from Dublin UNESCO City of Literature and Dublin City Council.